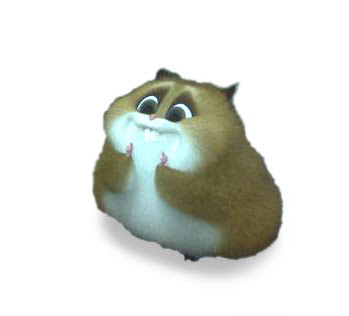 I'm starting to hear a lot of people complaining about the design of the characters of the new WDAS "Bolt" and although I agree that they're not as quirky as the ones designed by Sanders, they are very appealing characters. Just so you know, I've seen about two minutes of finished animation of this upcoming film that a Bothan let me look at and it looks far better than what we've been presented with so far. I also got to see enough structured, unfinished work to tell you that if you like well thought out characters then you have nothing to fear. And those of you that are worried about Disney's return to animation glory have no need to worry. It's a truly beautiful film.

That said, I'll tell you out front that there's one character that will steal the show...

Rhino, the ADD Hamster is going to be a fan favorite after this film is released.

If you read my article about Pixar's Secondary Characters that tend to steal the show you'll understand what I mean... the little Hamster in the ball is this film's scene stealer... he's got true heart.

I saw the trailer in the theater for "Bolt" and I fell in love with the hamster. I am looking forward to seeing the finished product.

Is someone different doing the trailers for the Disney product? The Bolt Trailers looked all right. The Princess and the Frog teaser left me cold.

The Wall*E trailers, from the very first Teaser, made me really want to see that movie.

The Teasers for the Incredibles and Monsters were great. I mean, outstanding.

I just wonder why the Disney branded product doesn't seem to be up to the same level to me--even though I trust the good stuff I'm hearing about Bolt will be there when I see it on the big screen.

I'm really looking forward to "Bolt". As for "Princess"...um, well, yes, the trailer I saw was a little underwhelming. The "kiss the frog" joke wasn't very funny, and that dentally-impaired firefly...yeeech. I hope a better trailer is created so I can get my hopes up about Disney 2D again.

hamster looks ripped off from that steve carrell squirrel in over the hedge.

"I'll get my ball!" we love that line from the Hamster! We cannot wait to see Bolt. I actually think Bolt is a great lovable character!

On behalf of many, many talented people, I thank you for your kind words, HH. :)

I look forward to November.

I really hope Disney decides to switch High School Musical 3 around with Bolt. The poor dog is going to get pummeled in the Box Office by Twilight, and HSM will be the usual low-budget high-profit success story. At least HSM is a successful franchise that can stand it's ground against Twilight, Bolt is going to die unless someone fixes their mistake.

Well, it's not really fair to accuse Disney of making the"mistake" - Bolt has had the Thanksgiving release slot for a long time, and moved their release date up by a mere 5 days, before Twilight moved up by about 3 weeks. Bolt is still being finished as we speak, so releasing it almost a month early really isn't an option. There probably will be some overlap, but I don't think kids or families will turn out in droves for Twilight - hopefully if both films are reviewed favorably, there'll be room for both through the holiday weekend.