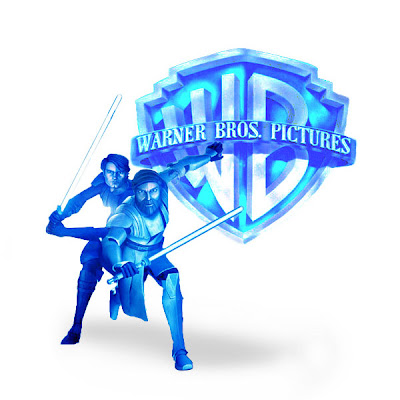 Today the first Star Wars film to not have the 20th Century Fox logo on it opens nationwide.

It's the first Star Wars film to come out that doesn't begin with the crawl rolling up describing what has happened before.

Let's hope it has a good script, because for one of the "prequels"...

That would be a first.
Posted by Honor Hunter at 12:58 AM

Remember it's not necessarily a Star Wars film but a pilot to the TV show, the animation was budgetted for TV, and targetted for children, so give the film (TV pilot) a break.

Even if it's a pilot for the series, it's still going to be looked upon as a theatrical release and should have been given the budget for a feature length-movie. Otherwise, it should be premiering on TV. Good job Lucas. (note the sarcasm)

This doesn't belong in the theater.

It's the first Star Wars movie I won't see. Thank goodness I still have the memories of seeing episodes 4-6 in the theatres. And thank an even greater goodness that I remember very little from episodes 1-3. ESPECIALLY episode 1

the first 3 Star Wars were classics, then he started to *tweak*.

Lucas confuses me, he WAS such a genius, did so much with sound and technology then BLLLLTTTT!!! Splat right into my toilet.

I agree completely with toole. This should not have gone to the theaters. It would have been okay on TV, but not nearly as good as Genndy Tartakovsky's animated versions were.

GL has taken to saying "This is what I intended all along" regarding his questionable direction with the Star Wars franchise. Either he was a very lucky idiot back in the 70s, or his capability for self-deception rivals that of most politicians.

Well, it could have been put a little differently, but... that is a very valid point.