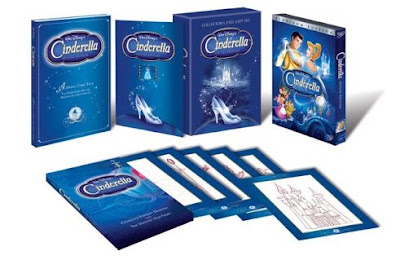 Berlin, Germany, August 28, 2008—Walt Disney Studios Home Entertainment (WDSHE) proudly unveils five additions to the celebrated Platinum Collection of animated features to be released on DVD and for the first time ever on Disney Blu-ray Hi-Def. These include some of Disney’s most beloved classics Pinocchio, Snow White and the Seven Dwarfs, Fantasia, Fantasia 2000 and Beauty and the Beast. Each will be available for a limited time only, in new multi-disc sets featuring rarely seen footage and an array of new bonus features.

Fittingly the one that started it all for Walt Disney, Snow White and the Seven Dwarfs, the first feature length animated film ever made, will be the title that will mark a new era in home entertainment around the world, launching Disney’s worldwide BD-Live Network, a revolutionary technological breakthrough in home entertainment that will connect family and friends, allowing unprecedented interactivity and ease, from anywhere in the world.

“The landscape for the Blu-ray format is very healthy, and we believe that the enhanced movie experiences that the format provides, such as Disney’s BD-Live network, offer consumers the chance to reinvent the experience of watching movies in their homes, and the interactivity and connectivity that is being provided will truly make the family room relevant again,” continues Mr. Chapek.

Gordon Ho is Executive Vice President of Marketing and Business Development for Walt Disney Studios Home Entertainment (WDSHE) adds, “Disney’s BD-Live experience will enrich and deepen the overall consumer experience, and we are delighted that, Snow White and the Seven Dwarfs will be the one that will launch Disney’s BD-Live network worldwide.”

The Platinum release roll-out will be:

Pinocchio, the beloved story of a wooden puppet who wants to become a real boy, comes to Platinum Edition DVD and Disney Blu-ray in spring 2009. Disney's second full-length animated movie, Pinocchio won two Oscars®, one for Best Score and another for the unforgettable song "When You Wish upon a Star.” It returns for the first time since 2002.

In conjunction with these releases, Destino, the unfinished animated feature film created by Walt Disney and famed surrealist painter Salvador Dali will release. Begun in 1946, it was rediscovered in 2003 and completed by Walt’s nephew, Roy E. Disney. The collaboration between these two legendary artists will be available to own for the first time along with an all-new feature-length documentary that examines the surprising partnership between Dali and Disney.

Beauty and the Beast, the only animated film ever nominated for an Academy Award® for Best Picture, earned a breathtaking six Academy Award® nominations and won two Oscars®. Beauty in the Beast Platinum Edition will be available in fall 2010.

And many more to come after this first wave...

Good stuff. Good news.
Posted by Honor Hunter at 9:40 AM

Time to get BluRay player.

Don't you wish the new Platinums actually came in those lovely boxes like Cinderella, Lion King, and Aladdin did?

I am beyond thrilled. I've been desperate to get Snow White into my collection, and finally it's on its way! That one, Pinocchio and Sleeping Beauty are the ones I'm most looking forward to. Hurrah! Now if only Disney would finally give in to fan demand and release Song of the South...

I made an error, and went with the HD-DVD format. I saw the battle ongoing, and really didn't see HD-DVD immediately dying a horrible death two weeks after I bought mine.

Once some of my favorite non-Disney classics are out in Blu-Ray--like Raiders of the Lost Ark, the Back to the Future movies (I don't expect to see the De Laurentis Flash Gordon, my favorite movie of all time, out on Blu-Ray in the next decade) then I'll have to get one. Oh, and Disney's Tron. If they released that in Blu-Ray, I'd probably find a way to get a Blu-Ray player tomorrow. I love me some Tron.

Yeah, what's the deal with Song of the South? I've seen it a few years ago, and it's not any more racist than Gone With The Wind, which has been released in several DVD packages. Or some Shirley Temple movies that have also gotten the DVD treatment.

It would do well. They've got Splash Mountain! They haven't tried to release it, so they don't know what kind of protest there would be, if any.

When Warners banned all their Speedy Gonzales cartoons out of some misguided political correctness, there were protests--from Mexican American groups that loved Speedy Gonzales!

I don't know that Disney really has their finger on the politically correct pulse of the nation by never releasing Song of the South.

Two questions from this article come to mind. The first is, are these being released as both DVDs and as Blu-Rays when released? And the second is, Is Destino included on one of the other discs, or is it a separate release that's part of the whole Platinum Classics line?

I got my PS3 for my birthday and yes, it does have a built-in Blu-Ray player that goes with the console.

Just remember that I will be considering to get a Disney film on Blu-Ray if it's available like Wal-Mart, Target and other stores, it cost about $30 each.

Maybe someday, the price will soon to go down where I can buy Blu-Ray Disney films if I'm getting into HD, all movies on Blu-Ray works with my Playstation 3.