Disney Getting Devil's Due... 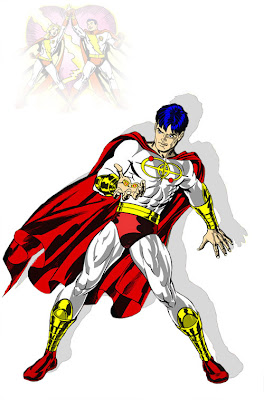 It appears that Disney's ABC Family Channel is getting another super-hero series(remember Middleman?)...

Will all the success that comic book films are having the Mouse appears to have optioned another little known comic book for adaption to television. Devil Due Publishing's "Will Triumph Fights Alone" is being planned by the Mouse for adaption.

The story follows a novic superhero Will Triumph(clever huh?) who is the son of a powerful superhero team known as the "Dynamics" until they were killed fighting their arch-enemy , Dr. Loricas. He gets hold of his parents' Rings of Power. The catch is these rings only work for a married couple(Holy matrimony, Batman!). The story finds Will hunting for Dr. Loricas to avenge his parents death and also trying to find that "special girl" who will help him unlock those rings so he can be the super-hero he's always believed he would become.

Will it be any good? Tune in next year when it premieres on ABC Family and find out... same bat time, same bat- ahhh, you get where I'm going here, don't you?

Developing...
Posted by Honor Hunter at 6:56 AM