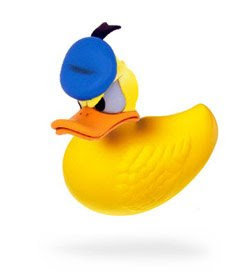 Here's what the reviews for George Lucas' "Clone Wars" are saying...

"It's difficult to say whether the dialogue or the characters are more wooden." - Charlotte Observer

"Has it come to this? Has the magical impact of George Lucas' original vision of "Star Wars" been reduced to the level of Saturday morning animation?" - Chicago Sun Times/Roger Ebert

"An enjoyable escapade and a great introduction to the forthcoming series - just not the seventh Star Wars film fans were hoping for." - Empire

"George Lucas is turning into the enemy of fun." - Entertainment Weekly

"In the absence of any extensive innovation, the video game-ready results play more like a feature-length promo for the imminent TV series of the same name than a stand-alone event." - Hollywood Reporter

"Despite some absolutely gorgeous animation and adjusting expectations for what Clone Wars is meant to be, the Force is not strong with this one." - Los Angeles Times

"The Clone Wars is minor to the point of irrelevance, nothing more than a stylized direct-to-DVD shrug projected onto a big screen while Lucas launches two more TV series filling in prequel blanks better left empty." - LA Weekly

"Expectations were set so low by George Lucas’s lousy trilogy of “Star Wars” prequels that the latest from the Lucasfilm factory comes as something of a surprise: it isn’t the most painful movie of the year!" - New York Times

"... It's more of a problem when a film feels like a videogame, which implies a story that's more fun to play through than watch. Unfortunately, there's no interactive option for Star Wars: The Clone Wars" - The Onion

"The best that can be said about the movie is that it's harmless and mostly charmless." - Philadelphia Inquirer

"The animated "Star Wars: The Clone Wars" movie is out today, and Lucas seems to be more in touch with his inner Ewok than ever. The movie's tone will probably send original-trilogy loyalists over the edge, the final shove that sends their Hoth Ice Planet action play sets into exile on eBay." San Francisco Chronicle

"The movie gets more cluttered and confused as it moves along, though it's dotted with so many generic battle scenes and paint-by-numbers light-saber combat sequences that you can see how it's at least attempting to mimic the illusion of excitement." - Salon

"The story lacks narrative tension. The dialogue is stilted and overblown, a problem also in some of the live-action incarnations. That, combined with visuals that consistently lack punch, leaves little to engage us." - USA Today

"... there's little doubt this stuff will look more at home on the tube than it does on the bigscreen, since one thing is for sure: This isn't the "Star Wars" we've always known and at least sometimes loved." - Variety

"Clone Wars will appeal only to the most tolerant, galactically minded children and their parents." - Wall Street Journal

"Unfolds with all the entertainment value of watching somebody else play a video game." - Washington Post
Posted by Honor Hunter at 2:04 AM

Its starting to bug me how everyone seemed to be expecting a Star Wars film. It never was, its just the pilot for the TV. So of course its gonna be cartooney. I bet if it had premiered on TV no one would be complaining.

For the life of me I just don't understand why George Lucas doesn't learn to leave well enough alone.

Is it because he just can't be satisfied with what he has accomplished or is it that he has nothing new to offer and doesn't have what it takes to pack it up and walk away?

For those who don't understand the frustration of those who don't just love the latest addition to whatever Lucas-genre, please try to keep in mind that many of us remember the magic and the "awesome"-ness of the original works. What has come after doesn't even come close.

If you love the additions, great.

For the rest of us, it is like watching a great actor phoning in his performances.

Star Wars: The Clone Wars is a totally Shit!
The original saga is better.

I'm a major SW geek and while I didn't love it, I didn't hate it either. It really should have just been a 2 hour pilot shown on TV only.

Overall, the movie looks great though the character animation (mainly how they walk) looks a bit robotic, very similar to how the fully animated characters is the Prequel Trilogy looked. Others have complained but I have no real problem with the stylized look of the characters (a bit wooden) as I completely understand Lucas' desire to have something unique. I actually think it looks kinda cool.

Dialog was never a strong point for SW movies and this one carries on that tradition. Ashoka is a bit annoying (Sky Guy, Artooey) but will appeal to younger boys and girls. Ziro the Hutt...hmmm, I sat there with my jaw dropped open and not in a good way. Don't get me started on the plot...I think that's what ultimately hurts this movie. Way too thin and unimportant within the SW universe to be the basis of a movie. Fine for a TV episode but not for a theatrical release. My advice, wait for the DVD.

funny how this guy bashes Lucas like no other. It's now the in thing to do it.

But, guess who is helping in making Star Tours 2... lets see what your opinion is then

^^
I disagree. I think he's a SW fan from what I can tell but is disappointed like alot of fans are about the end product he's been assosciated with lately. I'm somewhat in the same boat, at least with Clone Wars and the latest Indiana Jones. Lucas created products that were well below the standards of not only past SW and Indy productions but also well below what other studios are currently releasing (ex. Dark Knight).

As for Star Tours, it clearly won't be a Lucas only project as I doubt Disney would give that much control over their attractions to someone outside imagineering.

Bottom line is you can't equate a SW movie to a 10 minute ride update. If it's great, I image credit will be given to all parties in volved and I'm sure if the updated Star Tours ride sucks, blame will be directed not just at Lucas (fairly or unfairly) but at WDI as well. The latter probably being most at fault.

Oh no people are bashing a millionaire. You monsters...

It's a TV show all the critics and the haters get a clue, and grow up!!!

"Your powers are weak Old Man."

I grow tired of George Lucas' attempts to draw us away from our money.

I was a SW geek during the first trilogy, a fan during the second, and now a bored (though admittedly old) non-buyer going forward.

If it's a TV show why was it a theatrical release? Shouldn't it have been shown on *gasp* TV? I'm not going to pay $8 to see a TV show on a gigantic screen.

So if someone has a lot of money that makes them fair game for bashing? I don't like class envy, I think that if we if bash Lucas it should be for the quality of his ideas and stories, not how fat his wallet is.

I was just curious. About a year or so ago, you were really hopeful that the WDC would land Lucas' big tv projects, namely, this animated series as well as the live action series he's working on. After what he has given us this summer, and your clearly disappointed views on both of them, are you still hoping he will team up with Disney in some capacity other than a redux of Star Tours?

You forgot Richard Roeper's review: "Sucks, this film does." I couldn't stop laughing when I heard that

Lucas and any other elite that steals money from the working class deserves to have more than criticism, they deserve to be put behind bars.

I'm hoping this country decides to change course this November and elect more responsible, fair government officials that aren't in the back pockets of the rich and corporate interests.

^^
Yes, George Lucas should be put in jail. Ridiculous.

For those wondering why we'd judge a TV show pilot by theatrical standards, the answer is simple: they released it as a feature and charged the same admission price as any other feature. At that point, they have to be judged just as harshly.

Toy Story 2 started out as a concept for a direct to DVD release, but after realizing the concept was worth releasing as a feature, they made damn sure the finished product would be to.

At this point in his career, George Lucas has endless resources and armies of talent at his disposal. There is no excuse for aiming this low.

I was kinda dissapointed and still enjoyed it to some degree. I wouldn't recommended to non-star wars fans. It would have been better if it was in Digital 3D and then we would get our money's worth. Otherwise, wait til DVD comes out.

Some of those reviews really crack me up. I can't disagree with any of them.

Honor, couldn't you find a picture of Howard the Duck? That would have made this posting perfect!

the big problem that we have with star wars now a days is that it has been 30 years since the original, which defined a new vision of scifi. everything since then is compared to it. It was the first--how do you compare anything to that. i understand that bigger, better, flashier parts all have their effect, but I'm talking about the first time emotion of it all--we never saw anything like that before--and how can you try to compete with a memory? You can't.
People want more Star Wars--so Lucas gives more SW-- but it isn't the first time you saw it, so you will never beat the original the defined a genre.
Look at the new batman movies--they have completely rewritten the whole superhero genre for movies--DC is reworking all of theirs to follow suit.
My advice--try to enjoy the movie for what it is--a movie that is to take up your time--if you don't like it, go outside and do something athletic with your family.
And remember, whenever Roger Ebert doesn't like a movie--that means it is worth seeing...