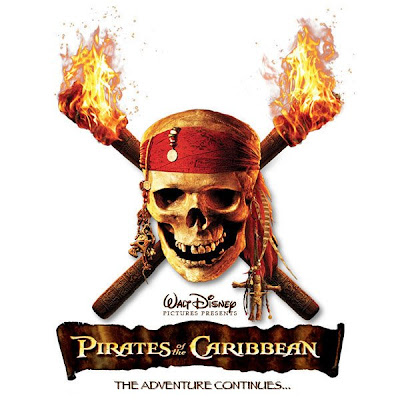 So the rumors are floating out there that "Pirates of the Caribbean: Part 4" is supposed to start lensing in 2010. Gore Verbinski's schedule is so packed with projects that he finally informed everyone involved that he officially would not be involved in this one. I can imagine after spending about five-plus years on the sea with pirates, he's had enough of them for a while. Sad, as I'd like to have seen him back with Johnny Depp. But apparently the search is on for a new director so that the production can film next year.

The other big question is who will be writing this one? The original writers Terry Rossio & Ted Elliott are pretty busy at the moment too. Could we see a new director and new writer for the continuing adventures of Jack Sparrow? I personally like the idea of continuing the adventures without Will and Elizabeth, but the one character I hope winds up haunting the dear captain is Barbossa. I want to see him chasing after that map that he stole from the mangy pirate all across the Caribbean.

And the last question I have is will this story be ready for theaters in 2011 or will it be so effects-laden that the actual release date will be in 2012? If they plan on coming out in 2011 there's going to be a very crowded Disney schedule with a possible "Lone Ranger" film, "Tron 2" and others. Then again, 2012 is going to have "John Carter of Mars" and a couple more as well, so it's not exactly going to be an open playing field if the release is a year later.

Still waiting on those Bothans for that Pirated answer...
Posted by Honor Hunter at 12:28 AM

Let's hope the newest movie isn't as horrible and terrible and the last 2 ones. The 3rd movie is so bad, I given up on the series.

Any updates on the rumors of Zac Efron getting a role?

Last I heard he just signed on as the lead for the Jonny Quest feature (gag) and I sure hope I don't see him polluting my television screen via trailer for two films.

Will Pirates even be recognizable without Verbinski, the writers, and two of the major characters?

I would say off all these, it's probably the writers that make it the most lovable (next to Jack)

As long as Jack and Barbossa are there, I'm there. I'm fine if the two lovebirds are absent. I could not stand Keira Knightly. I just hope this new film has lots of creepy adventures and clever humor in it. And I hope Disney has learned from the last film's mistakes (personally I loved the first 2) and will avoid them in the new one.

Personally, I'm pleased that Verbinsky is not going to be a part of #4 and if we could get new writers, I'd be thrilled. The disaster those 3 came up with for the last 2 films in the series soured many a fan on the series.

Considering that this is a Disney franchise, however, I'd almost wish someone else would take it on. The Mouse pretty much ruined a home run with all the tinkering, fixing and nonsense that evolved into the 2nd and 3rd installments.

Sadly, all things considered, I'd rather they left Capt. Jack right where is he and left the fans to reminisce about the gem that was COTBP.

I beg (no, insist) to differ.
Of course, the 1st was pure magic. But the next two did take risks and I had fun going along for the ride. I thoroughly enjoyed all 3.
And personally, I hope they leave it there, because w/o the same writers and director, it will certainly fall off the edge of the world.

I love the Pirates of the Caribbean movies, all three of them. They are my most favorite movies ever made, all three of them, so full of the supernatural, imagination and swashbuckling action and humor. Gore Verbinsky did a phenomenal job on all of them and so did Terry Rossio and Ted Elliot. I am so glad that Jack Sparrow and Barbossa will only be appearing in it along with the other pirates. It makes for a better story, Jack, Barbossa, and Davy Jones were my most favorite characters in it. I am so glad Will and Elizabeth won't be in it, their story is over. It's sad that Gore won't be returning, but they have a good direction for the 4th and good writers, we're good, but we can still hope he returns. As long as we have the writers, we're good. I also can't wait to see The Lone Ranger. Why, because it's a western, and my family and I just love westerns, and it'll be a lot like the movie the Mask of zorro since both icons were created at that time and the movie was really funny, adventurous and action filled, and it'll be the same thing with The Lone Ranger, in fact Ted Elliot and Terry Rossio are writing the Lone Ranger, also wrote Pirates of the Caribbean and Mask of zorro, so it'll be even better. Johnny Depp as Tonto is one of the funniest castings ever and I just can't wait to see what he does with the role, it'll be so hilarious since he always plays quirky, zany characters what made Jack Sparrow so loved by everyone, the most unlikely pirate. 2011/12 just can't get here fast enough, we have such great films coming out. Bring us that horizon.

Pirates of the Caribbean is coming to movie theaters exactly on May 25th, 2011 Wednesday!. And i know that because i work for walt disney pictures, and i'm risking my career telling you this here, because i could be caught here telling you all this, but i don't think i will be because, this is not a popular movie website anyways!. And i've used the ananymous safty button here!.

The movie websites all the internet are now confirming that Pirates of the Caribbean: On Stranger Tides, is officially going to be released to theaters on May 20th, 2011 Friday, and not on May 25th, 2011 Wednesday!, which was originally thought to be its release date previously!.