The Greatest Action-Adventure Film Of All Time... 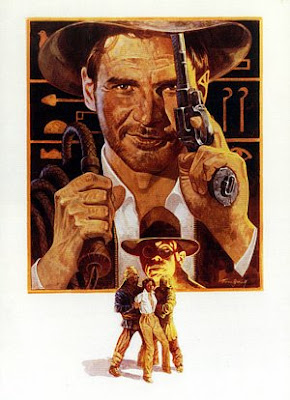 It's hard to believe that it all happened twenty-eight years ago today...

On this day in 1981, George Lucas and Steven Spielberg released "Raiders of the Lost Ark" which hijacked my brain and I haven't gotten it back since.

When I went into the theater to see this new film that the poster claimed was "From the Creator of Star Wars" and "The director of Jaws" I didn't know what to expect. When I left after it was over, I was suffering from withdrawal from having the only out of body experience I've ever had watching a film. I fell in love like many others with the new character of Indiana Jones. He was bold, brash and all too human. I enjoyed seeing him even in the flawed sequels to this masterpiece(sans Crystal Skull of course). Happy birthday, Man in Hat!

Now if they'll just convince Lucas to let Paul Dini do that animated series of Indiana Jones I'll be happy...
Posted by Honor Hunter at 12:12 PM

What a great film. I can't believe it's been that long.

Raiders was the greatest adventure film of all time until Lucas tarnished it with Crystal Skull.

The Best adventure film of all time and my most favorite movie of all time. Last Crusade, Temple of Doom, they're all great, but Last Crusade and Raiders were the best, number 4 didn't exist. Paul Dini is one of my most favorite writers because of his work on Batman the animated series, plus he wrote the entire thing of Batman: Arkham Asylum the video game, one of the best Batman stories, the best Joker of all time, the best dialouge, I absolutely love it. Can't wait to get the game, thanks Dini for all you've done. Animated Indiana Jones and Pirates of the Caribbean; that's classic!