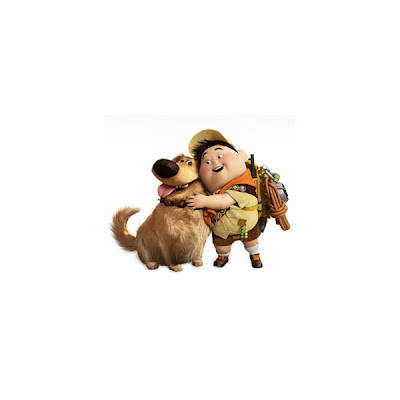 There's some quite buzz going on in Tinseltown about Pete Docter's new film...

Some people are starting to talk about if and why "Up" should nominated for an Academy Award for Best Picture. Or some say, at least Best Screenplay. So once again pressure will be put on the Academy to reward an animated film with the stature they normally only want to give live-action films. So if the momentum continues to grow it will be hard for those that hand out the little golden statuettes to actually do what it unthinkable. Give this charming film the respect it deserves. There has long been a bias against animated films, culminating with "Beauty and the Beast" becoming the first animated feature to be nominated for Best Picture. The stuffed shirts and tightened girdles inside this exclusive club couldn't take this and what culminated from all this was an award for Best Animated Film. For a group of people that consider themselves open and progressive, the Hollywood elite decided to create a segregated area for animated films since they're inferior to live-action. Imagine it as two water fountains, one labeled "live-action" and the other "animation" for drinking up movies. Separate but equal right? Riiiiiiggght. The reason there are two status groups for these type of films is because the Academy doesn't consider them equal and never really has. Remember how Walt wasn't even thought of as a competitor, which actually helped him slowly move into the live-action side. Every studio in Southern California thought that "Snow White and the Seven Dwarfs" would be a bomb. It turned out to be the most profitable film of that year. And when Disney moved into live action they felt he would succeed, because again, the perception of being an animator and not a real film maker. He must be crazy to make this "20,000 Leagues Under the Sea" because it'll sink the studio. Animators and animation have been the brunt of this kind of thinking since the days of silent film. The movie business was wrong then and still is. Animation to them is a step down on the artistic ladder. The public, feels differently however. They vote with their wallets and animated films still tend to be some of the highest grossing of any films. Name me many films you can release on a new format seventy years later and still sell millions and millions of copies. Try that with most live-action titles and you'll be lucky to see hundreds of thousands, if not thousands.

This is the best picture I've seen this year. Up deserves whatever recognition it gets, but as long as the public responds, who cares? But I was choking back tears during the little mini-movie about Carl and Ellie's life, and when Carl started tearing up, looking into the Adventure book, so did I.

It was just a great movie. The Incredibles is still, and will probably long remain, my favorite Pixar movie, but I think Up has unseated Toy Story 2 for second place. Just can't wait for Monsters 2, Toy Story 3, Cars 2, King of the Elves and whatever else they've got in the pipeline. Looking forward to the live action, but what I'd really like to see is an epic film.

Pixar cuts a lot of stuff out of their plots for story clarity, cohesion, and time . . . I'd love to see an epic where they allowed the movie to stretch a bit. Where some of those subplots they excise in development actually got into the movie. I could sit through a 3 hour Incredibles epic . . . though maybe there's not much of a market for that. Sigh.

I agree with this great article as well. Up is awesome. Pixar rules! If only the rest of Hollywood could get a clue.

"Up" is definitely Oscar-worthy. It's on the same realm as "Finding Nemo" (a perfect film from beginning to end, as is "Up"). Both pictures have eclipsed anything Pixar (and DIsney) has ever done IMO.

Hear hear! Now somebody just needs to tell the Academy.

I completely lost faith in them when they deprived both Wall-E AND the Dark Knight of a Best Picture nomination. How elitist can they get?

No more than ever, the academy seems to want to acknowledge and reward small underseen movies. Box office success seems to cause the academy to look past films.

Mark Twain, you voiced my sentiments perfectly. There's something seriously wrong when the two most praised films of the year aren't even in contention for Best Picture.

And they honestly were the two most praised films of 2008. see for yourself:

Fully agreed with you Honor. I was not pleased when the "animation" category was created because that largely killed off any possiblity we will see another animated best picture nominee, much less winner. This treatment is also often given to some of the best blockbusters, and also to foreign films. I don't mind a separate category for foreign films but feel it demeans them (just like animated films) to also be eligible for best picture and rarely receive a nomination as many of the best pictures in history have been made abroad. I feel best picture should be explicitly for English language films and that it should include all films in this language - including animated. Quite a few animated films from Disney and Pixar rank among the five best of their year and a few have deserved to win IMO. With regard to "Up"...it is certainly one of the best pictures of the year so far but we should wait till January to decide whether it belongs in the top five.

While I would like to see Pixar get the recognition they deserve (opening Cannes was a step in the right direction), it wouldn't be the first time an overwhelmingly critically-praised animated film was later snubbed at the Oscars. That post is just as applicable to UP as well, as Pixar has proven again that they should move up from the Oscar's kiddie table and compete with the adults.

I did like what Phil Villarreal wrote in his UP review: As thoroughly lovable as the movie is, most of the running time is a crushing letdown because it follows about 15 minutes of some of the finest filmmaking I’ve seen in my life.

If a film generating praise like that doesn't deserve proper recognition, what film can?

I totally agree that Up, along with many others, deserve oscar nominations...but anyone think that maybe Hollywood would get a clue if OTHER studios actually made decent animated films?

They have stories like this every year about Pixar's films. Wall-E, Ratatouille, The Incredibles, Nemo, etc. It just isn't going to happen.

This movie was not good im sorry to say.

I liked the idea but very poorly executed

"This movie was not good im sorry to say.

I liked the idea but very poorly executed"

Wow, I guess Jeffrey Katzenberg DOES read this site!

Just kidding, but whoever you are anonymous, you're so full of crap if I squeezed you the room would turn brown. You wouldn't know great film writing if it was nailed to yer behind!