Pooh In Its Original Form... 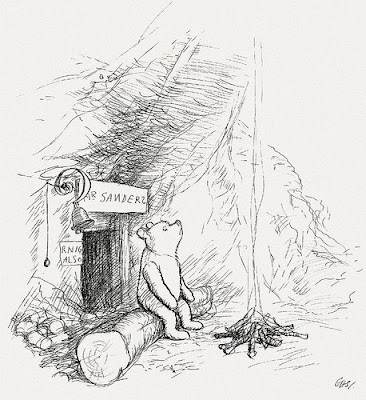 Walt Disney Pictures will release a new Winnie the Pooh film that is currently scheduled to bow on the silver screen in 2011...

There goes that year again. Sorry, I couldn't help it. But seriously, the great thing about this is the creative change that has happened. Sure, it's a new Pooh film. It's another chance for the Mouse to market their second most popular property, but...

Big deal you say? Actually, I think it is. If Michael Eisner was still in charge along with the Suits that are no longer running Disney Consumer Products then you can bet it would be CG just like "My Friends Tigger & Pooh" and would have the lifelessness of that same series. Instead, it'll be hand drawn. It'll be theatrical so you can expect the quality to be better than a direct to video or DVD release. I'm not saying it'll be as good as "The Princess and the Frog" or something like it, but I am saying it'll be of a much higher caliber than "Pooh's Heffalump Movie" was. And I will bet you the story will be quite good. Two words why:

He is directly in charge of this project and loves Disney's endearing characters. He has no intention of mucking them up in some drab, bland story set up to sell plush toys. He will be watching over it and therefore I will most likely be going to see it.

Now I've got to go and try to remember why I have this string on my finger...
Posted by Honor Hunter at 9:03 AM

Oh my fucking God! Are you serious?! YES! Pooh is my favorite Disney animated franchise!

I hated CGI Pooh. The only way he should be is hand-drawn, like the book illustrations!

I really liked "Pooh's Heffalump Movie" and thought it had more heart and magic than most of the CGI coming out today from studios such as DreamWorks.

I got super excited when Kenny Loggins said he was 'working on music for a new Tigger film'.

I flooded forums stating that "The Tigger Movie 2" was surely on its way.

When it turned out to be the finale film for "My Friends Tigger & Pooh", I was let down!

So this is awesome news!

I dreamed of making my own Pooh film for Disney - "Many More Adventures of Winnie the Pooh".

Broken into segments like the original, it'd feature and/or cameo all the Pooh characters thus far.

We're talking Golfer and Owl coming back, Kessie coming around, Lumpy there, Turtle too.

But, most importantly, the fact that Darby and Christopher are brother and sister.

My main idea was that they each had their own stuffed animals. Hers were Kessie, Turtle, etc. - most of the new characters featured in "My Friends Tigger & Pooh' as well as the 'lamer' characters.

Sometimes Darby and Christopher trade - which is why certain characters pop in and out.

I am a silly dreamer, but, in my wildest dreams one day my Pooh film would be made at Disney in 2D.

Forgive me if I ramble.

I don't get it. I heard about this a while back and really started to doubt Lasseter. The problem with having so many incarnations of Pooh over the years, CGI and all the other ones, is that as far as the general audience is concerned, they've seen it. How do you sell this film? "Yet another Pooh film"? "No wait, it's better than the last 3 have been!", "It's animated 100 percent by guys in Burbank, not folks in Australia!" I don't see how it's possible to promote it as anything but just the next Pooh offering. How will this film really be able to differentiate itself from any of the others? Story? What's left from the source material that hasn't been used yet? If they haven't already used a story in tact they've certianly used bits and pieces. Anything that they repeat will be noticed. Any Pooh that they produce that is true to the spirit of the 60's/70's films will seem quaint and dull to all but the animation/Disney purists. Maybe the animation will make it spectacular. There aren't enough animation connessuers to stand up and shout- "that is such a great Andreas Deja scene!" to let the theater goers know that what they are watching is any different than Pooh's Heffalump Movie. And frankly, those newer Direct to Videos were pretty darn good animation wise. The overall art direction was cheaper looking, but it wasn't sloppy like they used to be. The problem with Pooh is that most of the public likes him more as an icon and Tshirt design than as an animated character. He is a machine, mindlessly spouting cute sayings and malapropisms that we've all heard a thousand times before, and yet he's also been touched and changed by so many different creative (VP) voices that there's nothing interesting about him. He's a watered down every bear- he can dress up like Buzz Lightyear, or go exploring, or celebrate Easter or Halloween or Tax Day, or be British, or American, or whatever anyone wants him to be. Walt didn't like sequels, I'm betting he would have hated franchises. I'm glad 2-D is back, I hope to have a wonderful time going to see new Disney 2-D films, but it's gonna take a lot of convincing to get my money for this one.

Pooh is the essence of childhood. A model of innocence. The poster child of blissful ignorance.

This is not for the Disney Animation hobbyists, that's what "The Princess and the Frog" and "Rapunzel" are for.

This is for kids, and kids at heart - who can still appreciate a silly old bear after 40-some odd years.

Fans of the bear will gather for his heartwarming antics and never know the difference between this film and those direct-to-video sequels.

And why should they have to?

If this cute bear can still hold his own after all these years, than he doesn't need a lengthy introduction as to the history of this film versus the others.

He just needs to deliver quality animation, adorable gags, and more of the lovable sayings that got him to where he is.

So Lasseter is definitely overseeing the movie? In that case, I am looking forward to it. The last Pooh film I enjoyed was "The Tigger Movie."

Yeah! "MY Friends" was alright, and it was a great way to introduce Younger kids, but I couldn't really watch it. I got annoyed about how it wasn't Christopher Robin (Darby IS nice though) and I missed Gopher and Owl with a passion.

It'll be nice to see 2D back, now if only they would release "New Adventures of Winnie The Pooh"

I just hope they go back to the original color schemes of the characters from the orignal films. The last time I looked Eeyore was suppose be gray and black (with a pink tail) and not that hideous purple and pink color he sports now. And Tigger is suppose to be orange, white, and black and not orange and yellow. Hear my words John L. !!!!

I haven't seen any of the Pooh vehicles after "The Many Adventures of Winnie the Pooh." No Piglet movie, Tigger movie, Heffalump movie, nor the My Friends series, but what promotions I saw of them gave me the impression that they were not based on stories in the original two Milne books. Was that impression wrong? If not, there should be plenty of story material left in them for another movie, which is the route I'd be most interested in seeing them take.

I'm currently 18 and heading to college this fall for advertising. Disney Marketing or Disney Consumer Products is precisely where I'd love to end up!

I love Disney animation, and am always passionate to discuss news surrounding their projects.

I'd like to join the Disney College Program to get some background at Disney and go from there.

The Piglet Movie actually adapted a number of original Milne stories (including the expedition to the North Pole), I am not sure how many are left to adapt, but I hope that is the route they take. The more recent Poof films have been way too schmaltzy in my book.

And prepare for an uphill battle!

The timing is right to return to a gentler, sublime Pooh story. If Lasseter really wants to invest in this character, then he can set the tone for a Pooh movie like no other. Personally, I like the first three short films as they "hold" those characters far better than any 90 minute film has done. Their world is smaller, their stories are smaller. Even the running times were more (unintentionally) kid-friendly. It would be great to see a back-to-basics Pooh film, with beautiful hand-drawn animation, and an avoidance of chatter-filled dialogue.

Very interesting! Might I suggest adding a new cast of characters in there, including Zachary Gordon as Rabbit's young son, Skippy, Dante Basco as a fast-talking deer named Buck, Judi Dench as the Queen of the 100 Acre Wood, Jodi Benson as a headstrong sprite named Loretta, Jordan Nagai as a shy racoon named Samson, including a new villain, a ruthless vulture named Rubik, voiced by Randall Duk Kim, & his assistant, a snake named Ivan, voiced by Richard Steven Horvitz.

And I've come with a perfect synopsis.

Your favorite Winnie the Pooh characters are back in an all-new animated motion picture event. When a dastardly group of vultures, led by the evil Rubik, threaten to take over the 100 Acre Wood, Pooh & his friends must reach the Queen of the 100 Acre Wood, while befriending a group of forest animals, led by a beautiful sprite named Loretta. Will they get to the Queen in time to save the 100 Acre Wood?

I hope you like the idea, because I was thinking of making a change to the Winnie the Pooh movies.

Hope you enjoy it!

Stop making fun of my name calling me Winnie the Poop!

Could the Shermans write an original song for it?

Could the scenes be linked by the characters moving from one page in a storybook to another?

Could they keep the dialogue to a minimum?

This could be good.

Hand-drawn is nice, but writing is what matters, and neither today's Disney nor Pixar has what it takes to create something truly timeless. They will try to modernize it.

I wrote to Disney myself and got some absolutely BREAKING news for you about this project!

I know the director, producer, writers, and story artist.

Visit my animation news blog below, the breaking news is in red print!