The Plot Thinkens, Or Didn't... 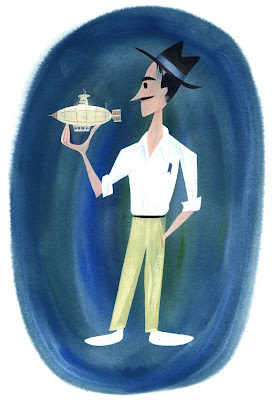 When animated movies are made they start off in storyboard phase and then sometimes move to animatics (moving storyboards with temp dialog and music). At the Lamp this has been refined to an art based on the final result of their ten films. Lots of preliminary art is done, plot lines are worked, reworked and spit back out. Check out that piece of art by Lou Romano for an early version of Charles Muntz. He also produced an earlier version of the long lost explorer that Carl Fredricksen idolises, holding an egg that held within it the germ of an earlier version of the story.

MTV's Movie Blog has a nice article about that version of the film before it got streamlined. A version that held more layers inside this wonderful story. That's one of the many great things about Pixar: the fact that within the story you can find hidden pages that tell an even deeper tale.

But perhaps one that will never, fully be told...

NOTE: Am I seeing things or does that earlier pic of Charles Muntz look like Walt Disney?
Posted by Honor Hunter at 8:43 AM

Fascinating story.
Its always interesting how animated films develop and change from their initial idea.

The early idea for Muntz could be Walt, but it also looks alot like a young Howard Hughes. The drawing of Carl holding an egg certainly looks like an old Howard Hughes when he had gone a tad crazy and become a recluse.

So they modeled Carl after Walt Disney at first but then they switched to Roger Ebert? Interesting.

According to Romano's blog, both of those pictures are of Muntz, not Carl, and both are based on Howard Hughes at different points in his life.

Charles Muntz sounds a lot like Charles Mintz, who stole Oswald from Walt in 1928, among other things.

Thanks for posting something new, and taking that half naked half man from the top of your page.

Spokker is an idiot. He obviously doesn't read and think before he writes.

When you saw that I had made a mistake did you become erect or something?

Man, if there's any Internet group that is good at insulting people and acting classless, it's Disney fans. I am in good company.

Check out the LA Times' Travel Blog for more on how a mob of Disney zealots can personally attack someone for what is nothing more than criticizing Disneyland.

One poster had to fight back the urge to insult the man even more. If that isn't mental illness at work I don't know what is.

I'm afraid that I have to agree. I'm just glad that someone finally had the guts to said it.

(And yes, I AM a different anonymous)

So go ahead Spokker, go ahead and say something very nasty to me. You are an expert in insulting and belittling people. The past has shown that.

So go ahead, continue to hide behind your computer and say something nasty. I would expect nothing less from you.

Be careful Spokker, I think some of them know where you live! Hehe.

Let's everyone play nice and not call anyone names, k?

How about we stick to the subject of the post? Now there's a revolutionary idea.

Right. Up is a great movie no matter who the characters are based on.

and spokker is still an idiot

Winkler, what's the problem with that "half naked man"? He just had his shirt off... i'm sure if it was a chick in a bikini everybody'd be fine and dandy :p

Aaanyways, I see the similarity to Walt in that picture. It's actually the fist thing I thought of.

Has anyone else noticed that this is the second Pixar film (along with Ratatouille) with a very anti-Disney message. Perhaps I’m reading too much into them, but the way I see it Charles Muntz is meant to represent the Disney Company: adventurous and adored by their fans in younger days, (the goggles worn by the kids even seem to suggest the iconic Mickey Mouse ears); but once they lose the magic touch (the incomplete bird fossil/a slump in film quality after Walt passed) they become obsessed with finding that perfect specimen/film formula and continue for years without achieving it, but still killing off any new competition that comes along.
Along comes a plucky new hero (Carl & Russell = Pixar) who stumble upon greatness almost by accident and take it in stride as they move on to bigger and better things.
Muntz does manage to create some talking dogs which can only be a dig at Disney’s talking animal obsession (e.g. Beverly Hills Chihuahua perhaps). The dogs make no sense in this film otherwise.
Ratatouille’s underlying critique was considerably deeper and more specifically anti-Eisner, but I've already posted my thoughts about that one elsewhere here.
Thoughts?

Charles Muntz was based off of Charles Mintz, the producer in the 40's and 50's that stole Oswald the Rabbit from Walt Disney. Carl is based off of Spencer Tracy, the greatest actor ever. Up is one of the best movies I have ever seen, certainly deserves Best Picture, in the leagues of Citizen Cane and The Wizard of Oz, it's that level of perfection.

And another thing, Monsters, Inc. deserved Best ANimated FIlm, not Shrek, Shrek is terrible and not even an original story, it's based off of a story that Steve Oedekerk came up with before Dreamworks and Katzenberg stole from him about an Ogre and making fun of Disney, it isn't even the original film Oedekerk came up with, they ruined it. Ratatouille deserved Best Original Screenplay, not Juno which was just wierd, stopped watching it within the first five minutes, they only gave it to Diablo Cody because she's new and they felt sorry for her. PIXAR is better than Dreamworks in ever aspect, even if Shrek 2 made a lot of money, it is one of the most forgettable movies ever made and dosen't even compare with Snow White, the greatest animated film ever made, the Citizen Cane of animated films, and doesn't even compare with Disney's films.

applejack,
I agree with your assessment and have thought the same. However, I also believe they are effectively, and with the depest respect for all that Walt stood for, saying "never again" and making darn sure that Disney/Pixar "keeps moving forward."
No more Eisners, no more coasting for decades at a time.
(...though I hasten to add that Eisner did much good until the untimely passing of Wells.)

The young and old Muntz sketches resemble Howard Hughes, a good template for a reclusive millionaire inventor. But the name is too close to real life villain Charles Mintz to be unintentional. Happily the story ends well, today we have Oswald back in the fold, and UP is a terrific film.