More Pooh For You... 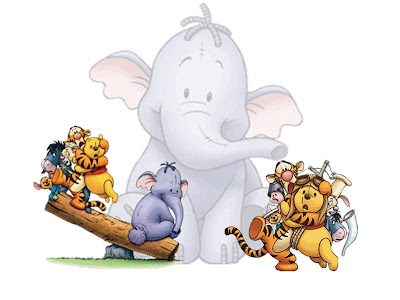 It seems until a few days ago, disney was poised to have a year without a film in 2011 and Pixar was to have two that year (Cars 2, The Bear and the Bow).

I'm still waiting to hear back from a couple Bothans, but let us talk a bit about what we know, what's rumored and what we don't know...

First off, Lasseter's Lamp has had pretty steady employment up in Emeryville for a while now. It's probably one of the safest jobs in animation to be working for Luxo and family because they turn out hit after hit. Toy Story 3 next year... do you think it'll bomb? How about Cars 2 the year after? As John Wayne would say, "not hardly, pilgrim." It's been feared that once "The Princess and the Frog" came out many of those artist and animators would be let go. Some probably will, but Lasseter and Catmull don't want to have to continually keep rehiring people or having to train a large number of new people. They'd like to be in the position of Pixar where they know they're going to move from one project to the next, but Burbank doesn't have the hitting streak that Emeryville has. They're hoping to change things, but animation takes a lot of time and it'll be years before we'll know for sure if it worked.

What was needed was a project that could employ all or most of the animators that left TPATF to tide them over between CG film projects like "Rapunzel" and "King of the Elves" in the near future. Winnie the Pooh fits that bill. I'm sure some of you have heard, but for those expecting another television quality project from DisneyToons, that ain't the case. For a change, for the first time in decades, Walt Disney Animation Studios will be animating a film based on that silly ole' bear. This means the quality is going to be dramatically different/better than all those other spin offs. And as of now it's going to be vignettes like the original film (Honey Tree, Blustery Day, Tigger Too!) had. At least, as of now that's the case but we all remember that things can change.

There are rumors out there that Steve Anderson and Don Hall will direct it with Clark Spencer producing and Burny Mattinson as lead story artist. Now, as to this I can't verify it just yet. But it does sound in line with what Lasseter is trying to do. Keep the crew together, make a high quality hand drawn film, fill a void for 2011 and use two directors to spread the workload. I can say that Lasseter will be overseeing this project personally. That alone should guarantee a story that is light years ahead of those last few films. When I get more confirmation about the further adventures of the bear with little brains I'll be sure and update you...

Will the new Winnie the Pooh film be a part of Disney canon because it'll be made in the Hat?

It's good news that they are looking to keep some of the talent from PatF and to ensure that this happens. So now thinking about it now, it does make sense.
Wonder what's going to happen with the shorts that had been suposedly delayed until after PatF? Are they still going ahead or delayed or cancelled?

Great post. I've been looking forward to more info on the Pooh movie.

The Tigger Movie was pretty well done, back in 2000. The animation was good, done in Japan I believe, and the backgrounds were lush. I'd like this new one to have a few simple short stories just like the original featurettes and some decent songs, preferably by the Shermans.

If WDAS is nice enough to attach a short to this feature, wouldn't it be great if it was a 7 minute hand drawn piece using one of the supporting characters like Gopher?

Could we get a couple of stateside Hunny Hunt rides to accompany the film?

"Wonder what's going to happen with the shorts that had been suposedly delayed until after PatF? Are they still going ahead or delayed or cancelled?"

Stay tuned for a post about that later this week...

Good news about Pooh if the franchise is refreshed with timeless charm and less Tigger (a little of that loudmouth goes a long way).

I hope the shorts do continue. I really want another Mickey Mouse short of the same caliber as "Runaway Brain".

Thanks Neal & Honor!
I wonder when WDA will add this to there site? (http://www.disneyanimation.com/projects/index.html)
Probably whenever they remove Bolt from "future projects"..

^anonymous: add this to their site, not there.

^Neal: the featurette they're making, not their.

It's like the posters on this site are 8 year olds, sheesh!

Kill Lumpy! We don't need no stinckin' new creations to go with the classics. If they make a new one they'd better stick with what works. I trust John Lasseter and doubt they're going to milk the cheapquels that came out.

Then pass this along to all other Pooh fans that hate Lumpy and all the other horrors Michael Eisner's cheap, straight to video crap produced.

Have I made myself clear, Neal?

I have to say, I thought the modern "trilogy" of Pooh films were all pretty charming and cute. They maintained the simple innocence of the original and felt true to the world. Regarding Lumpy, while I was originally not thrilled to see them spoil one of the "mysteries" of the Hundred Acre Wood, he really is a very cute, sweet character.

I'm confident that the new film will be a cut above, but aren't they rushing it a bit if they're aiming for 2011 (and probably early 2011 I would guess)?

Also, I must admit that it gives me at least a little bit of concern that they chose to announce this at a consumer products expo.