Interview With The Ruler Of The World... 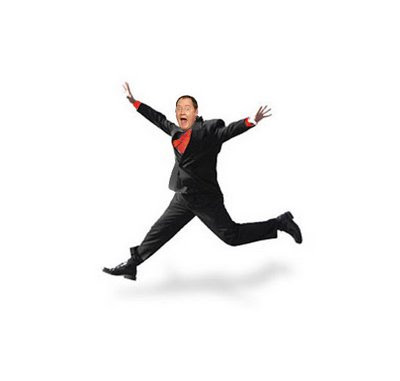 The Disney world that is...

Now I know that Bob Iger is the head of the Mouse. In fact, I think he's downright brilliant for buying Pixar and appointing John Lasseter and ruler supreme over all animation and giving him that very, very influential position over at Imagineering. But Iger rules the balance sheet. The numbers. He doesn't rule the creative part... and he knows this. That's what makes him so smart. He knows his limitations. With "Up" doing smashingly at the box office right now and prospects for "The Princess and the Frog" this holiday season, the man in the Hawaiian shirt could be getting more control. We already know he's in charge of almost all the animation and heavily involved in the parks, but with each success he's probably going to have more and more influence in the live-action film division as well. He's working behind the scenes on "Tron 2" and we know that the Warner co-production of "1906" is going to have him as an executive producer. Credited or not. But he's also going to be involved in Andrew Stanton's "John Carter of Mars" live-action film for Disney too. If "Toy Story 3" and "Cars 2" make buckets of cash for the company do you think he won't have even more say? I can tell you success in Hollywood matters even more than the real world to Suits. He's going to have more control over what comes out in the live-action part of the company. That's actually a good thing. Perhaps we wouldn't have had such a meek year so far had his fingerprint been put on the greenlighting of films over the past few years. Spreading that Pixar dust across the company is a positive step in the right direction if you ask me... and if you don't, it still is.

Now, with that said I think I should direct your attention over to Total Film's website. They've got a great, very large interview with Lasseter about eveything from the beginning of the Lamp, his time under Disney as a college graduate, the future to what his philosophy is like. Great, great read.

If you love film and Disney, I can't recommend it enough...

Hat Tip to Upcoming Pixar.
Posted by Honor Hunter at 12:01 AM

Iger's tenure has been filled with nothing but disappointment. The parks are becoming homogeneous and filled with out of place Pixar attractions. The studio is in last place. Everywhere you go, all you see is Hannah Montana and High School Musical crap. His business model is based on doing what works and not taking any risks, which in turn is creating mediocrity. Say what you will about Eisner, but his ego made sure Disney was taking big and bold risks. Eisner wanted Disney to be the best. Just look at Walt Disney World. Under Eisner, we got two new theme parks, the Disney Institute, Celebration, an endless supply of new hotels, Pleasure Island and West Side, two water parks, and two golf courses. Since Iger took over, land is being sold off, the only hotels being built are time shares (including the intrusive Bay Lake Tower), a golf course is being bulldozed to build a non Disney hotel, Pleasure Island is shuttered, and the Magic Kingdom is a complete disaster. Of course you could argue that Eisner lost his passion (and you're be right), but all of the stuff I mentioned happened after he left so you can't blame him. Even Disney's successes since Iger took over, mainly Pirates and HSM, were started by Eisner. I'd take Disney six years ago over Disney today.

You can take it six years ago if you want... I WOULDN'T.

And a lot of your facts are incorrect Ryne. I don't have the time to go over it here, but what you say about "happened after he left so you can't blame him" isn't the case. Many of the things you don't like were started under him and finished under Iger.

As for Eisner taking risk. You're WAY OFF on that. Way off. But unfortunately I'm late for a movie and don't have time to address it.

Iger's not a saint, but he's closer to it than Eisner...

I've been down on Iger since he dumped the Narnia franchise. Not to mention that the 2 Narnian movies Disney did have a hand in had far too little of the signature Disney magic. It seemed like Disney was a little afraid of the subject matter, or didn't care enough about it. But at any rate, Narnia never did fully come to life onscreen. Certainly not like Oz did or Middle Earth did. What a freaking shame...

Disney Live Action is a complete mess. I blame Iger and Cook for firing Nina Jacobson and promoting Oren Aviv out of marketing.

Ryne makes some valid points. Eisner wasn't always an overlord of cheapness and mediocrity. However, I think a lot of the debate regarding each CEOs merits comes down to where they are putting their resources, parkwise. Under Eisner, the California resort was underfunded and filled with unimaginative bean counters. Unfortunately, much of the same critiques about that era can be said now about Iger, with respect to Walt Disney World. Unless Iger realizes that the Florida property is stagnating at an exponential rate, and changes some of the management structure there, I can't fully be behind him either. That being said, Disneyland's future under Iger looks better than ever...

I agree with Honor Hunter.

So it's Bob Iger's fault that most of his reign at Disney has happened while the economy has completely tanked? Eisner expanded in a spend-happy environment, which happened to service the desires of we fans. But Iger took over a bloated juggernaut in a terrible economy. I'm all for risks...but now is not the time for that.

And i really never get traditionalists' issues with Pixar attractions. Those movies are huge and they are the new "it" flix for kids these days. And as much as i have zero desire in Montana or HSM...those are huge with kids these days, Iger would be a terrible manager if he didn't allow them to flourish while they're still hot.

For live action just look at the success of POTC. Disney just need to find the next big thing, and drop all that Hannah Montana rubbish!