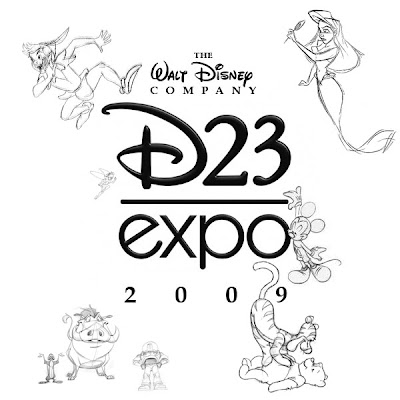 I may actually have to attend this...

I knew about D23 well before it was announced, but the details were kind of vague as to what would finally be offered. Now that the info for this expo has been released I'm starting to get giddy. Just a bit. But it seems the Mouse is planning on having its own version of Comic-Con, just with Disney related items, panels and merchandise. Now at first I was a little skeptical, but after seeing the line up I'm kind of impressed. If they actually pull this off, I think this could be the beginning of something beautiful and something big.

Here's the preliminary schedule which will undoubtedly change as it gets closer to September:

Four Extraordinary Days of Live Events, Interactive Pavilions and One-of-a-Kind Entertainment Celebrate the Past, Present and Future of Disney.

ANAHEIM and BURBANK, Calif. – June 3, 2009 – Disney fans will be given unprecedented access to never-before-seen movies, TV shows, park experiences, collectibles and more from Sept. 10 to Sept. 13 at the Anaheim Convention Center when Disney and D23: The Official Community for Disney Fans present the first-ever D23 EXPO.

Tickets to the D23 EXPO are available beginning today at http://www.D23Expo.com. Admission includes access to all experiences and entertainment at the D23 EXPO and can be purchased for single days or for the full four days of festivities. Admission is discounted for members of D23.

“We hope this will be the ultimate event for the multitude of fans who have been so instrumental in Disney’s success,” said Disney President and CEO Bob Iger. “The D23 Expo represents the finest in Disney entertainment from across our great company and will offer a one-of-a-kind, unforgettable experience for people of all ages to enjoy.”

Anaheim Mayor Curt Pringle added, “The upcoming D23 Expo at the Anaheim Convention Center will serve as an exciting opportunity to present Anaheim to the millions of Disney enthusiasts around the world. For the thousands of inaugural-year D23 Expo attendees who will visit our city in September, this will be a special and a memorable time in the birthplace of Walt Disney’s original theme park. It is a great honor for Anaheim and the Anaheim Convention Center to host this event.”

Among the centerpiece events of the D23 EXPO will be an extraordinary, exclusive opportunity to get early glimpses of several all-new Disney feature films. Only at the D23 EXPO will guests preview a wide range of upcoming movie events, including The Princess and the Frog, Rapunzel, Disney’s A Christmas Carol, Tim Burton’s Alice in Wonderland, TRON, Toy Story 3, Prince of Persia: The Sands of Time and The Sorcerer’s Apprentice. Walt Disney Pictures will present these special sneak peeks in a state-of-the-art cinema built especially for the D23 EXPO.

Walt Disney Parks and Resorts will take D23 EXPO guests behind the scenes to explore the rich legacy and exciting future of Disney’s theme parks and vacation destinations worldwide. Highlights will include a special look at what’s being imagineered for the future of Disney’s California Adventure, a peek behind closed doors at the amazing new technologies defining today’s and tomorrow’s Disney theme park experience, and the opportunity to meet and hear from the Imagineers, Cast Members and key Disney Parks and Resorts executives who create lasting memories for millions every year.

In many different ways, the D23 EXPO will explore the history and heritage of Walt Disney and the company he founded more than 80 years ago. The D23 EXPO will be home to the 2009 Disney Legends Awards – a 22-year tradition that pays tribute to the talented men and women who have made indelible contributions to Disney entertainment. This year’s recipients will be honored at a ceremony on Saturday, Sept. 12, marking the first time the prestigious event has been held off Disney property.

In an extraordinary exhibition designed specifically for the D23 EXPO, an incredible collection of classic and contemporary Disney props, artifacts and costumes will be accessible to the public for the first time ever. “Treasures of the Walt Disney Archives” brings together such amazing pieces as the fully restored, 11-foot model of the Nautilus from 20,000 Leagues Under the Sea; the stunning, jewel-encrusted book used in the opening moments of Sleeping Beauty; and other rare surprises from throughout Disney’s history. Ranging from the original Mickey Mouse Club and the musical classic Mary Poppins to recent hits like Pirates of the Caribbean and High School Musical, the “Treasures of the Walt Disney Archives” is a never-before-experienced exhibit that’s a D23 EXPO exclusive.

The D23 EXPO spotlight will also shine on Disney Channel's brightest stars in a can't miss-special event. There will also be an ESPN Sports Lounge, live broadcasts from Radio Disney, and a preview of ABC's new fall primetime shows, details of which will be announced in the coming weeks at www.D23Expo.com.

For Disney fans who want to take home part of the magic, Disney Consumer Products will offer myriad opportunities to do just that. Only at the D23 EXPO will guests be able to walk through the eight-room “Disney Dream Home,” celebrate the holidays Disney-style, see fine art created before their eyes, learn about Disney Fairy Tale Weddings, experience Disney couture fashion shows, meet and hear from the authors of a dazzling array of Disney books, prepare for trick-or-treating with the latest Disney Store Halloween costumes, and more ... all under one roof.

The D23 EXPO also will be home to the “Disney Dream Store,” where guests will find exclusive D23 EXPO merchandise and collectibles; the Disney pin-trading headquarters; and much more, including the chance to build your own Mouse ears.

Showcasing Disney’s appeal to fans of every generation, the D23 EXPO has created a multi-layered experience: Avid Disney enthusiasts can attend dozens of specially created panels and celebrity-speaker events, details of which will be announced over the next several weeks. Younger Disney fans, meanwhile, will be able to experience special interactive play areas, meet their favorite Radio Disney DJs broadcasting live, watch “Princess makeover” demonstrations from the Bibbidi-Bobbidi Boutique, and have fun in the Baby Einstein play area. Together, families can enjoy the Disney Lace Name and learn about Disney-themed scrapbooking.

The D23 Collectors’ Forum will present a wide range of options for collectors to show and sell their Disney memorabilia, and those interested in exhibiting can visit www.D23Expo.com for more information.

Fans also will be able to view and even take part in the first-ever Disney Fan Art Gallery, which will include the finalists in the Donald Duck 75th Anniversary Portrait Contest, as well as a one-of-a-kind fan art show. Full details and contest rules can be found at www.D23Expo.com or www.disney.com/D23.

All activities at the D23 EXPO are included in single- and four-day admissions, including the “50 and Fabulous Film Festival,” which honors three classic Disney movies that are celebrating their golden anniversaries this year. Sleeping Beauty, The Shaggy Dog and Darby O’Gill and the Little People, all originally released in 1959, will be presented on the big screen, one movie each evening, for Disney fans of all ages to enjoy together. Also featured at the D23 EXPO will be a special screening of Walt Disney Pictures’ upcoming Tinker Bell: Lost Treasure, along with an in-depth exploration of Snow White and the Seven Dwarfs: Diamond Edition, which will be released this fall by Walt Disney Studios Home Entertainment.

Tickets to the D23 EXPO, which go on sale today, are $37 for a one-day adult admission and $27 for children 3-12. To experience every bit of entertainment and excitement at the D23 EXPO, four-day passes are also available at $111 for adults and $81 for children. Members of D23: The Official Community for Disney Fans will receive a discount on up to four same-day admissions, as well as early entry to each day of the D23 EXPO for themselves and their guests.

Special vacation packages are available at the D23 EXPO website, from both the Walt Disney Travel Company (including Disneyland Resort hotel accommodations, D23 EXPO tickets and theme park admission), and the Anaheim Convention and Visitors’ Bureau, which is offering a limited number of area hotel rooms at special rates to those attending the D23 EXPO.

Many more details about the entertainment, events and special guests that will be part of the first-ever D23 EXPO will be announced in the coming weeks. Fans can keep up with all of the announcements by visiting www.D23EXPO.com, as well as by following “Disney D23” at Twitter and on Facebook.

About D23
The name “D23” pays homage to the wonder and excitement that began in 1923 when Walt Disney opened his fledgling studio in Hollywoodlace>. D23 is the first official community for fans in Disney’s 85-year history. D23 gives its members a greater connection to the entire world of Disney by placing them in the middle of the magic through its quarterly publication Disney twenty-three; a rich website at www.disney.com/D23; a new collectibles line, The Walt Disney Archives Collection; and special events for D23 members throughout the year, highlighted by the D23 EXPO in Anaheim, California, September 10-13, 2009. Fans can join D23 at www.Disney.com/D23, all Disney Store locations within the United Stateslace>, select shops at Disneyland Resort and Walt Disney World Resort, and www.DisneyShopping.com/D23.

We have just added your latest post "Blue Sky Disney: Nerdvana: Disney Style..." to our Directory of Pets . You can check the inclusion of the post here . We are delighted to invite you to submit all your future posts to the directory and get a huge base of visitors to your website.

When I first read that headline I was somewhat skeptical, but they really do sound like they're pulling out all the stops on this one. That sounds like an amazing opportunity and for less than $40!

Nerdvana? Have you been watching Big Bang Theory? =)

Uh, in the drawings, is Peter Pan wearing a diaper?