You got to love that Lasseter started the shorts program don't you? 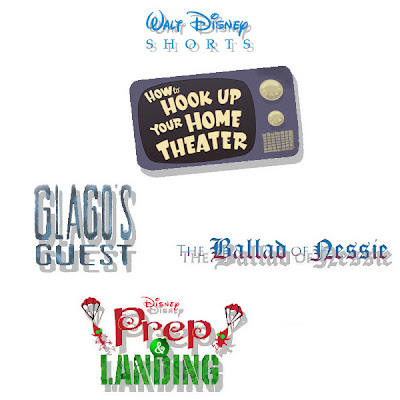 Or more aptly, what to put before a princess...

I lot of people keep asking about Disney's new shorts program. You know the one started by Lasseter when he was put in charge of Walt Disney Animation Studios (WDFA).

Since then we've had one short. ONE. The absolutely wonderful Goofy short, "How to Hook Up Your Home Theater." Remember those other shorts that were announced? One CG short was called "Prep and Landing" was announced. Another going by the name "The Ballad of Nessie" was going by stylized, hand-drawn animation. Then there was one by Chris Williams (co-director of "Bolt") called "Glago's Guest" that the wunderkin developed before Bolt. If fact, the short is what got him the gig as co-director of it. And then there were all those other rumors of shorts. The supposed reuniting of Mickey, Donald and Goofy being done by Eric Goldberg and others.

So, where are we? What happened?

Throwing out animation desks was oh, so stupid, Mr. Eisner. Really, it was limited thinking and I guess I have to forgive him for not being able to see past that enormous ego of his. It was after all, very huge.

Anyway, let's start off with an obvious question. At least to me. With Pixar coming out with a film a year we've gotten use to having a wonderful little short in front of it as a bonus. So, will "The Princess and the Frog" have one if front of it? We all know that "Bolt" came out last year and didn't initially have a short in front of it. Once the Suits realized that the power of the overly long Calvin Klein commercial known as "Twilight" was siphoning off money like an evil capitalist vampire they quickly took one of the Cars Toons, "Tokyo Mater" and dropped it in front of the 3D version of the film as an extra reason to see the film. That didn't help much, but a consistent pattern of putting shorts in front of Disney animated films should get the public understanding the extra value of a Disney film just like the same is for one from the Lamp.

As of now, and remember, things could change but the newest Disney princess should have a nice little short up in front of it. Come November, when we get our first hand-drawn animated film from Walt Disney Pictures since that horribly conceived cow starring western (not that I have anything against westerns, just bad westerns).

There will be a short attached to it as well. Everyone remembers when "Rapunzel" wound up getting a director change as Glen Keane left for "health reasons" and his co-director, Dean Wellins went on to work on pitching other animated film ideas and a short. Well, his short will be what is in front of "The Princess and the Frog" when the curtains go up and the lights go down.

"Tic Tock Tale" will be the computer animated short that your eyes get to grace before watching this new hand-drawn masterpiece. Now as for the story, well that'll have to come another post. From what I've heard though, it's quite a nice piece of storytelling with more heart than most of the films that have come out of the Mouse in a long time. Current management is focusing on story first... now if only the live-action division would do the same (sorry, another story for another time). And since WDAS has had all those computer animators sitting around waiting for "Rapunzel" to start working (which it now has), this has provided a bit of job security for them.

Now as for "The Ballad of Nessie" getting done, that is a short that is being done in a very stylized, hand-drawn look and we've not really heard much about it because those artist that like to use pencils were busy on the Frog. Not easy to finish something when you don't have the artist to do so. Again, thanks for getting rid of so many talented 2D artist, Eisner. So once Frog is done they can get around to finishing the "Nessie" short. What the management is trying to do is stem as many layoffs as possible with these short projects. Lasseter and crew understand that it's hard to find talented people and it's even harder to replace them once their gone. If the hand drawn film that comes out in November is a hit it'll provide a great deal of job security. Success tends to do that.

Now as for "Glago's Guest" coming out, there's not really any news I can report as to when we can see that. It's not known if it'll get a theatrical release or be part of a future Blu-Ray/DVD compilation of Disney shorts (think: Lorenzo, Runaway Brain, The Little Matchstick Girl, How to Hook Up Your Home Theater, Glago's Guest, Nessie, and a few others. Maybe = Pixar's Short Collection). But no set date yet.

I'm sure you've seen the news about the "Prep and Landing" short that Chris Williams came up with being turned into a half hour television special for the ABC Network this holiday. It originally started out as a short, but the potential for an expanded narrative was seen and it was handed off to a couple other animators once Williams became busy with "Bolt" a while ago.

As well as these there are a few other projects in various stages, but no greenlight for that Eric Goldberg short featuring the "Disney Trio" I was wanting. But another classic Disney character will be getting his very own hand-drawn short. Which one? Sorry, but I can't tell you that right now. Soon hopefully.

Thank you for the update here. This is one of the things I'm most interested in.

I hope you are right about the Disney shorts coming to blu ray/dvd. I have been waiting to see Lorenzo for so long, so if it will eventually be available to us that is great news.

I e-mailed Mike Gabriel about "Lorenzo" two weeks ago.

Here was his response:

"Lorenzo is eventually going to be released on dvd it looks like. I have no firm info on that but it is expected once we have enough shorts to merit a full dvd. Should be within a year or so I would guess. But just guessing. Sorry I can't be of more help. Glad you like Lorenzo. I am anxious to get it released, believe me.
Mike"

Prep and Landing is an amazing short. A lot fo heat, and a lot of fun.

I went to a Computer Science symposium back in Dec 08 where the speaker was Ed Catumull himself. He brought along Glago's Guest and showed it in its entirety. It was brilliant. Still a bit rough in places as it was being worked on, but the story was great. I really hope to see it in front of a feature at some point. It deserves to be seen on the big screen.

Thanks for all your work in hunting up this news and sharing it with us. I can't wait for these Disney shorts to start pouring out of WDAS.

Is Prep and Landing for this year??
I bloody well hope that it's on in the UK around the same time, like what happened with Shrek the Halls. I don't think I could wait too much longer.

It would be nice for some regular holiday specials. As long as they make it out here to the UK the same year! :)

It looks as though Dreamworks are doing a few more.
Aardman released the last Wallace and Gromit for Christmas. I hope they continue that tradition.

So yes, I pretty much want a full Christmas day line-up of animated movies and animated tv specials! :)

ah it seems the Disney site has been updated. Great!
The directors from How to hook up your home theatre on Prep. Cool.

Prep and Landing sounds fun, like the Elves are Santa's CIA prep squad or something. Nice approach, could be as funny as the animated sequence of Christmas Vacation. I'm definetly looking forward to seeing them all, especially the one of Mickey, Donald and Goofy reuniting. Great shorts and films to look forward to.