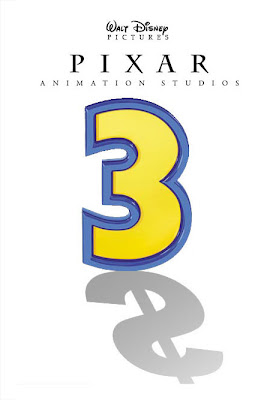 On this weekend the little animation start-up in Emeryville that I affectionately/jokingly call Disney Animation North is going to be sitting in a pretty historic position. Their latest film is already Pixar's highest grossing film ever, but by the time Sunday rolls around it will be even more. If that is actually possible.

"Toy Story 3" will have made over one billion dollars by the time the Monday morning sun comes up. That's right:

$1,000,000,000.00 plus spare change. Lots of zeros, but thankfully with a positive number in front of all of them. Congratulations go out to John Lasseter and the crew, but I have to give a special shout out and thank you to Lee Unkrich. Not a bad way to start your directing career, Lee. I mean, as a solo director, of course. He's been riding sidesaddle for a good while and it's nice to see him take the reigns and ride hard. What a success. You must be on cloud 10 right now.

Looks like the Mouse has made it official, even earlier than Sunday. Here's the official press release:

BURBANK, Calif. – August 27, 2010 – Two weeks after becoming the highest-grossing animated film of all time, Disney•Pixar’s Toy Story 3 will cross the $1 billion mark at the global box office today, joining Alice in Wonderland as the second $1 billion film this year from The Walt Disney Studios – the first studio in history to accomplish this feat. Disney first crossed the $1 billion threshold with Pirates of the Caribbean: Dead Man’s Chest in 2006. Toy Story 3 becomes the only animated film to reach this milestone and the seventh title in industry history.

“It’s been an incredible year as we saw the Pixar team bring Buzz and Woody back to the big screen and watched Tim Burton’s vision for Alice in Wonderland take the world by storm,” said Rich Ross, Chairman, The Walt Disney Studios. “These box office triumphs prove that creative storytelling brought to life by imaginative, inspired and talented professionals is something audiences respond to the world over.”

As of Thursday (8/26/10), Toy Story 3 tallied more than $592.9 million internationally, Disney’s largest international animated release. Latin American audiences have contributed $138 million making Toy Story 3 the highest grossing Disney film ever released in the region. Toy Story 3 is the most successful UK release in Disney history and currently stands as the fourth biggest title in territory history with $102.4 million in box office receipts so far. In Japan, the film has taken in $111.2 million and spent five consecutive weeks as the #1 movie. Toy Story 3 currently ranks as the #7 film in global box office history and domestically ranks #9 with $404.6 million in receipts to date.

Alice in Wonderland began setting records during its opening weekend (March 5-7), becoming the biggest March opening in industry history, the highest 3D opening ever and The Walt Disney Studios’ biggest opening for a non-sequel film. Internationally, the film went on to tally more than $690 million, becoming Disney’s biggest overseas release of all time and the fourth biggest title ever released overseas. Worldwide, the film took in $1.0243 billion, ranking it as the #5 film in global box office history.

I can see why they fired Dick Cook. What a lousy year the film division is having...
Posted by Honor Hunter at 12:18 AM

Honor, you went a little link happy in this post. 9 links in only 3 paragraphs? Congratulations Pixar, you deserve it!

I was extremely happy with this movie. Pixar could have taken the easy route and just milked some more money out of the Toy Story franchise, but instead they really delivered. This is one of the best films of the year and deserves all the money and praise it receives. Such a fitting end to a great trilogy.

3d prices are a large part of that, but it is a very good film, and a fitting capper to the trilogy.

With the constantly increasing ticket prices, next year there will probably be some studio that achieves three billion dollar films in a year, increasing yearly after that.

Ticket revenue is a useless means of comparing film success.

I'm betting some of those Disney execs are getting a little uneasy about letting Dick Cook go... it was clearly a pretty premature decision.

Thank 3D ticket prices and the natural rate of inflation for all of these milestones. I can still remember when hitting $100m actually meant something really special.

Now a big film can't even be considered a "hit" until $300m and even THAT is in jeopardy thanks to the bloated 3D ticket prices.

They needed TS3 and Alice to offset the sting of those two Bruckheimer flops.

I think this is al due to Mr. Pricklepants, he makes this movie :D

Toy Story 3 is very, very, very good and deserves every one of the billion dollar it made.

Of course tickets prices for 3D are higher, but still people are willing to pay it for this movie, if it was crap, they wouldn't I guess?!

In the overall Toy Story universe, TS3 was just too much extreme action nonsense, going way beyond the capabilities of a "normal toy".

So, as entertaining as it was, it doesn't deserve the extreme accolades it's been getting.

After you adjust for inflation, Gone with the Wind is still the highest grossing movie of all time, followed by Star Wars, The Sound of Music, ET and The Ten Commandments. Avatar is down somewhere around 14th.

While the box office gross obviously pleases the suits, it is a fairly meaningless milestone that does indeed have more to do with inflation than anything to do with the film itself.