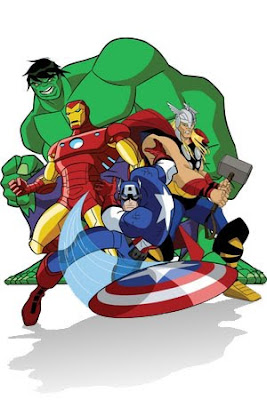 The new trailer for Disney XD's "Avengers: Earth's Mightiest Heroes" is out...

I'm glad that these shows are coming out and Marvel is in control of the content, but I sure hope the stories are better than the animation. I'm not a big fan of it in this or the previous trailer. I really did like that "Fantastic Four" series that was on Cartoon Network a few of years ago. It disturbed me at first, because of the Japanime look, but the quality of the animation and feel of the series was better than most animation. The stories were spot on Marvel as well.

Let's hope this series stories are just as good. I'm also looking forward to seeing more about that "Spider-Man" series later this year (the series will debut 2011). We probably won't hear much about the other couple of projects that they're working on until early next year. I certainly hope that Marvel starts to rely on some of the artist in the Mouse's television departments instead of farming it out to other companies.

You're not kidding. The character designs look wretched. It would be great if Marvel used Moonscoop again for some of their future programs. This looks way too similar to the tweeny Spider-Man and League of Super Heroes. At least Spider-Man had Greg Weisman. I doubt this new production has that level of talent behind it.

I wish they'd bring back that Fantastic Four series, it was great.

Too bad it lasted only one season.