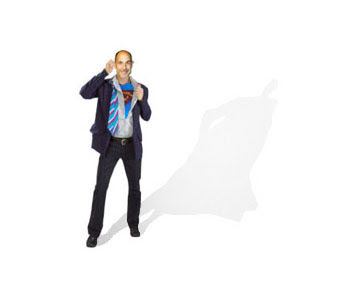 And here I thought Guillermo del Toro was a busy man...

If you've seen the news, David Goyer has pitched a project that he's writing as a trilogy of novels right now to Warner Bros. and they've bitten, or better to say, they've bought it. The novel, "Heaven's Shadow," which is written with author Michael Cassutt, is the first in a series (Part Two: Heaven's War, Part Three: Heaven's Fall). He will produce the films through his Phantom Four Films production company. No word yet on if he'll write the screenplays, but it's likely, him directing the projects, not so likely. But he's got so many projects there, he's not a tenant, he's part of the Warner family.

This is another in a long line of projects that the writer has set in play with the studio. In addition to writing "Batman Begins," the story for "The Dark Knight," his rejected "Flash" script, his current "The Man of Steel" script or his upcoming story idea for the third Nolan Batman film, he still seems to find time for other projects. Wow, where does he find the time? He must have a staff of social assistants to organize his life. It must be nice to feel so loved.

Goyer is a hack.