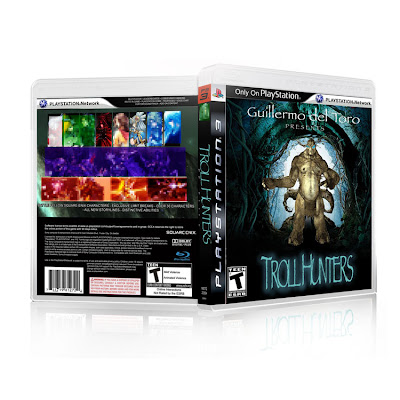 It appears that Guillermo del Toro is about to enter another world...

As if the director/producer/writer wasn't busy enough, he's about to add another title to his resume: Game Creator. If you read the Hero Complex blog over at the Los Angeles Times you may have seen the article they posted on him last week. It appears that a deal is within weeks of being announced with game maker, THQ that would have the film maker creating his own line of thematic/narrative games. I look forward to playing them. If they're as fun and entertaining as his films they should be real blockbusters. Which I think is what Danny Bilson, the head of THQ has in mind. If Bilson's name sounds familiar to you, it should. He was a co-writer on Walt Disney Pictures' "The Rocketeer" back in the 90's. And he's long had the goal of creating more cinematic platforms for the company, as with the Syfy Channel's adaptation of the company's "Red Faction" game into an animated mini-series. You have to wonder if Guillermo's "Trollhunters," which was supposed to be part of that Disney Double Dare You! imprint might show up as one of the first titles. Hmmmmm.

It's not known yet as to the exclusivity of the agreement. One hopes that the games he does won't interfere with his participation in a game that will likely come from his reinterpretation of "The Haunted Mansion." That right there would be a game that Disney Interactive is salivating over doing. But of course, del Toro will have to finish working on "At the Mountains of Madness" before filming can really begin on that. Hopefully, with him as director as well. But the prospect of a truly, depth filled game along the lines of "BioShock" or "Arkham Asylum" in terms of detail, narrative and graphics would be awesome. And from reports I've heard, those games he's planning on making could get announced quite soon as well.

Let's just hope that those games don't go the way of his little shingle set up at the Mouse last year...
Posted by Honor Hunter at 5:20 AM

I think a Haunted Mansion game along the lines of BioShock would rooooooooooocck!

Let's not forget Danny Bilson was a writer on the Flash TV Series, and his crowning acheivement as the father of actress Rachel Bilson. Nice work Danny!

Somehow I don't think you like her for her acting ability, Hostile 17.

What exactly happened to Disney's double dare you?

It died while I was romancing other projects. Now, I'm consulting over at DWA. We'll see where it goes from here.