Coming out to socialize... 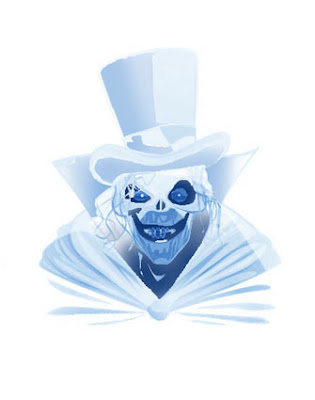 Forty-one years ago today, the Haunted Mansion attraction opened up in Disneyland for the first time.

999 ghosts would start their haunt this day, and one would quickly and quietly disappear. The Hat Box Ghost would make a small, but brief greeting to the first guests to enter this beautiful, rundown Southern mansion and its eerie inhabitants.

Many people would enter the park in 1969, standing in long lines just to see the last wondrous new creation that Walt Disney was a part of before his passing. This would include a little three year old boy from Mexico named Guillermo del Toro, who has ridden the attraction at least once every year since then. He is currently prepping a film version of the ride which will likely not film until after he finishes filming "At the Mountains of Madness" next May. But he's one of many that this amazing attraction had thrilled since its opening those many years ago.

I have a feeling that fans of the attraction will see some much liked lovin' once that reboot comes out. It's come a long way since starting out as the Museum of the Weird.

Happy Birthday, old house...
Posted by Honor Hunter at 9:42 AM


Does this make sense?

I'm really excited to see this! I love The Haunted Mansion, we ride it every time we go to Disneyland! This movie sounds great already, I just hope that the Ghost Host is part of it.

I love that old house. (I'm speaking of the WDW version.) When I first visited it as a child, the ride was simply mind-boggling. A delight from beginning to end. (I also loved the way it looked on the outside, and vowed that someday I too would own a brick Gothic house. That dream is still in progress). When I visited it again several years ago, it was in pretty poor shape. I'm happy to say that when I visited it again 2 years later, the refurb had taken place and the result was dazzling. The new audio system, in particular, was magnificent. Kudos to the Imagineers for bringing the Mansion back to, uh, life.

As for the movie, well, yay. It's a pity the first film was so awful. I have high hopes for this new version, but I hope del Toro doesn't just focus on the scares; there's a lot of fun in the old place, and I always - even as a kid - felt that there were some friendly ghosts there. So I'm being cautiously optimistic. I'm sure you'll give us details about the movie's plot when you get them, Honor. I'm already psyched about the Hatbox Ghost - a ghost who never actually made it into the ride, yet is the star of the film! How strange is that?