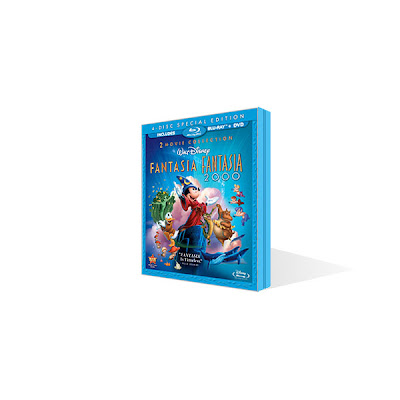 I know that sounds like an adult night club, but I'm really looking forward to getting this...

Finally, the Blu-Ray Special Edition of "Fantasia/Fantasia 2000" will be released on November 30th in a 4 disc collection that fans like myself will be able to enjoy in all its amazing detail. If you want to know what all these discs include, the Mouse has put out a detailed press release:

Releasing for the First Time in Over a Decade
To Astound the Eyes and Ears of a New Generation!

BURBANK, Calif., September 2010 -- Fantasia and Fantasia 2000 -- the magical, animated musical masterpiece and the contemporary classic inspired by it -- debut in highly anticipated Blu-ray High Definition and DVD 2-Movie Collection Special Editions on November 30. Walt Disney Studios Home Entertainment is opening the Disney vault to be able to present these two films that broke the boundaries of imagination in the highest quality possible.

The Fantasia and Fantasia 2000: 2-Movie Collection Special Edition will be available in a 4-disc Blu-ray Combo Pack ($45.99 SRP) and a 2-Disc DVD ($39.99 SRP) for a very limited time only. The Blu-ray transformation of Fantasia and Fantasia 2000 will reveal the magic, music and majesty of both films as never before experienced, with state-of-the-art picture restoration of the original Fantasia and pristine 7.1 Digital Theater System Hi-Def Surround Sound. The Blu-ray combo pack is a tremendous value featuring, in addition to the two films in two different formats, a wealth of bonus features.

Among those Blu-ray special features is the highly requested Academy Award® nominated short Destino. Available for the first time ever on Blu-ray, the seven minute film is the result of a unique collaboration between Walt Disney and Salvador Dali begun in 1946, but put on hold due to studio financial concerns. In 2003, Roy E. Disney worked with a team of modern day animators to complete the film as a tribute to Walt's pioneering artistic vision. Accompanying the highly anticipated short is an all-new feature length documentary entitled Dali & Disney: A Date With Destino, which explores the origins of the relationship between Disney and Dali, their collaboration on Destino, and ultimately how the film came to fruition so many years after its inception.

Fantasia, an unprecedented and magnificent feast of music and animated images, was initially released by the Studio in 1940 as a "road show" release. The following year, at the 14th Annual Academy Awards, Fantasia earned two Special Awards. The first was given to Walt Disney and associates for their outstanding contribution to the advancement of the use of sound in motion pictures, being the first commercial film released in multi-channel sound using a process called Fantasound, and the second to conductor Leopold Stokowski and his associates "for... unique achievement in the creation of a new form of visualized music... thereby widening the scope of the motion picture as entertainment and as an art form."

Considered avant-garde during its time, Fantasia has gone on to become one of the most popular movies of all time and today is considered a classic. In 1990, the film was selected for preservation in the United States National Film Registry by the Library of Congress as being "culturally, historically, or aesthetically significant." Featuring the Philadelphia Orchestra, conducted by Stokowski, this groundbreaking film, which consists of animation set to eight musical pieces, is narrated by Deems Taylor and includes an appearance by Mickey Mouse (voiced by Disney himself).

Synopsis: The dreams and visions of Walt Disney come to life in Fantasia, which blends music and film magic into an exhilarating movie-going experience. Unforgettable images are brought to life by some of the world's best music, and highlighted by the comedy of Mickey Mouse as a troublemaking sorcerer's apprentice, along with the beauty of winged fairies and cascading snowflakes, the majesty of Noah's ark and even plump hippos performing ballet in tutus.

Motivated by his uncle's foresight, Roy Disney continued the magic with Fantasia 2000 which begins where its predecessor left off. There are seven completely new segments, and viewers watch a bustling Depression-era metropolis in the style of Al Hirschfeld's famous cartoons, a flock of flamingos with slapstick yo-yo talents, an ark full of animals gathered by Donald Duck as Noah's first mate, and musical life breathed into a family of flying humpback whales.

Everything on the DVD plus:

-Disney View - This viewing mode maximizes the Blu-ray viewing experience with a 16 x 9 aspect ratio. Original artwork created by a Disney artist, in a style that complements the beauty of the film.

-The Shultheis Notebook: A Disney Treasure (running time: approx. 14 minutes) - An in depth look at the recently discovered Schultheis Notebook. The detailed log was created by Herman Schultheis, an effects man on Fantasia, and intricately breaks down the film from a technical view. Many of the special effects used in Fantasia were a mystery to modern day animators until this notebook was recovered.

-Interactive Art Gallery and Screensavers - Viewers can explore the artwork of Fantasia as never before, in HD resolution with unique Blu-ray interactivity and programming.

-Musicana: Walt's Inspiration for a Sequel (running time: approx. 10 minutes) - This documentary reveals rarely-seen art created for Musicana, a late 1970's project intended as a Fantasia sequel with a focus on exploring other cultures via their greatest musical compositions. Viewers are offered a look at the origins of pieces that were started by Walt, such as "The Emperor and the Nightingale" which was then taken over by a very young John Lasseter. Ultimately, Musicana was stopped to begin production on Mickey's Christmas Carol, but the memories of this piece still live on with the animators who conceived it.

Everything on the DVD plus:

-Dali & Disney: A Date With Destino (running time: 82 minutes) - This feature length documentary explores the collaborative relationship between Walt Disney and Salvador Dali, revealing how and why the Destino short came to fruition under the lead of Roy E. Disney in 2003 so many years after its inception in 1946.

I'm there because my HDTV and Blu-Ray were expecting this baby the day they were born...
Posted by Honor Hunter at 5:55 AM