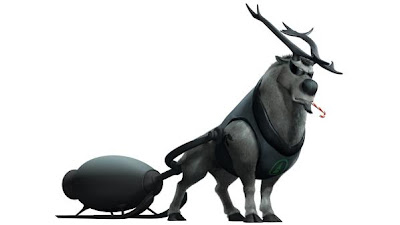 Walt Disney Animation Studios has been struggling to find the success that their younger sister studio has had for the last few years...

Personally, I've liked everything they've done since Lasseter took over far better than the decade of work that came before it. I thought "Bolt" was a well crafted story and "The Princess and the Frog" was a return to classic Disney animation. Both were financial disappointments, but not huge runaway successes like the Lamp is used to having.

But if you remember, my favorite project that WDAS has done so far is the ABC special, "Prep & Landing." I think that show has all the creativity and originality that everyone was looking for when imagining what Lasseter would come up with in charge of the Hat Building. Bolt had the baggage of coming from another story and Frog was another take on the Disney Princesses. This was original and charming. And it's been a huge success. Not only was it big in the ratings, it's won a good deal of awards since it came out. And over the weekend, it won some more.

The Creative Arts Emmys were held over the weekend and the Little Christmas Special won four Emmys. Prep won for Outstanding Animated Program. It won for Outstanding Individual Achievements in Animation: Background, Art direction and Storyboard. Congratulation to all the winners, you absolutely deserve it. Now get back to working with Wayne and Lanny.

I can't wait to see those Elves again in that new short...
Posted by Honor Hunter at 1:26 AM

It would be great if some of the other proposed shorts like the ballad of nessie and tik tok would come out soon!!!!

will there be a short with Tangled?

the Ballad of Nessie sounds amazing. I'm tired of waiting for them

Tic Tok Clock has been released on festival circuit so thats a possibility.
But so was Glagos Guest and that disappeared.

Any news of if the new prep and landing project will be a proper short or tv special. Or when we will hear about it.

"Any news of if the new prep and landing project will be a proper short or tv special. Or when we will hear about it."

Basicly is it in any stage of production or just a plan to revisit?

"Both were financial disappointments, but not huge runaway successes like the Lamp is used to having."

Huh? That sentence sounds funny...Perhaps the "but" should not be in there? Or were you trying to say that both films were not financial disappointments but not as successful as Pixar's films?

...Maybe its just lack of air conditioning on my end.

I have to say that the fact that Bolt came from another story should really be considered a minor thing. That's not really unheard of.
That was not the first time that a director changed and the story took a different direction. That also happened with Ratatouille as well, didn't it?

It could very well be the public's lack of trust with Disney.

All of the projects that you mentioned in this post, I have enjoyed. Having said that, perhaps part of the reason that people were interested in Prep and Landing was becuase many people assumed that it was a Pixar short.
(as evident by many twitter posts at the time) John Lassteer was in many promos for Prep and Landing after all.

Pixar has never let the public down. Disney has (during the Eisner era) so the main issue does seem to be a lack of trust of Disney.

On that note Honor, I realize that you hate the "Tangled" title and the reasoning behind it, but really, can you blame them?
After all, the competition has been absolutely FIERCE lately. and as noted, no one seems to be giving poor Disney Animation a chance these days. You can't really blame them for trying to attract the "boy demographic". This is a tough business.

Bolt is an average movie. The introduction was unexpected and grand, but the middle part dragged and the ending did not provide the same pizzazz as the intro. It had good elements, but ultimately, it didn't fulfill any expectations.

The Princess and The Frog is a disappointment on numerous levels. The redeeming qualities are the music and the nicely drawn animation. The story is the biggest weakness. They could had done more with the main character. The frog prince is a waste. He is not the prize anyone should make a future with.

The animation studio needs to bring back the golden age of animation. The Beauty and The Beast, The Lion King, and The Little Mermaid have not seen anything comparable recently.

I enjoyed Bolt as well as The Princess and the Frog.

But I have to admit, I enjoyed Bolt a bit more. Bolt was a good film, with a good story. The characters were great.

Everyone whom I have personally talked to has liked Bolt. Perhaps Disney could do more with the characters. Like maybe a short film.

I think Disney Animation ought to make another 2D movie starring animals. Lay off the humans for a while. They should find a story that's as strong as Lady and the Tramp or The Lion King. It's a shame Disney botched the Narnia franchise. An Disney-animated version of The Lion, The Witch and The Wardrobe could have been amazing.