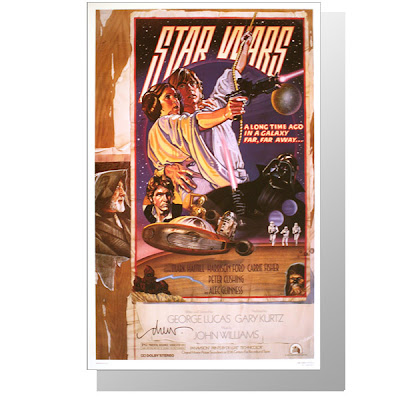 Now, this poster here feels like the artist was channeling "Flash Gordon" while painting "Star Wars" all the way back when...

Of course, the artist is Drew Struzan, probably the best known poster artist ever. He and Bob Peak were my two favorites growing up, but Drew was the better known. He defined the 80's poster. Over at Star Wars Official Website, they have a teaser video for the tribute to the man and his work in the documentary, "Drew: The Man Behind the Poster."

He's had an incredibly long list of beautiful artwork that he's created for many films, some that were good, a few great and even several that were real stinkers. Ahh, but the posters.

The posters were all great...
Posted by Honor Hunter at 3:36 PM

So you didn't know that Celebration V is going on???

Struzan's original poster for "Hellboy" is phenomenal. Of course, all the work he's done for "Star Wars" and "Indiana Jones" is amazing as well, but there's something intrinsic about his "Hellboy" poster. It's a shame it wasn't widely used by the studio to promote the film.

As a side note, Struzan ain't cheap, either. A few years back I wanted him to do a poster for a short film I had recently completed, and his staring price was $25,000. If I had the money, obviously I would have commissioned him to do it, and it would have been completely worth it. The only problem was that the film had completely drained me of any and all funds.