Worlds We Would Have Had... 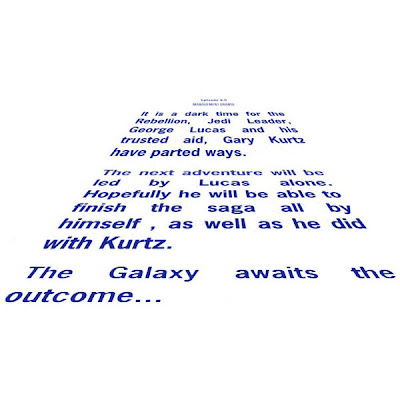 Today, Gary Kurtz will take part in a discussion with Ben Burtt, and model makers Jon Berg and Lorne Peterson entitled "Masters of the Empire" at Celebration V...

Tomorrow evening, the reclusive producer will take the stage for "An Hour with Gary Kurtz," in which he will wax on about his participation in the "American Graffiti," "Star Wars, and "The Empire Strikes Back" for sixty minutes. It'll be interesting to see how he deals with some issues since this is an official event sponsored by Lucasfilm. That's the organization run by George Lucas, with whom Kurtz had a falling out back in 1980/81.

To imagine how Star Wars would have ended had he been able to convince Lucas to continue with the original outline is to dream a geek's dream. Imagine if Han Solo had died in an assault on the Empire, Queen Leia would have to lead her rag tag group of Rebels in their continuing fight with the Galactic Empire, while Luke would go off and wonder the stars in exile. And he didn't have a sister named Organa. Wow, now that's much better than rehashing "A New Hope" with another Death Star, don't you think? If you'd like to read a very enlightening interview with Gary, then go over to the Los Angeles Times' Hero Complex blog. Good stuff.

Before, the Dark Times, before the Empire...
Posted by Honor Hunter at 12:24 PM

If Gary Kurtz had produced the Prequels instead of Rick McCallum there would be no Jar Jar, no wooden romance with Mannikin and Pap-smear-me and he would have set Lucas straight. Unfortunately Lucas is a stubborn old man who always gets his way.

"Leader Lucas and his trusted aid Gary Kurtz have went their spearate ways."

Have you lost your mind as well as your capacity for grammar, Mr. Hunter?

Didn't your English teacher tell you to proofread?

Blame it on the Dark Side...

Besides, I didn't write that. It's a screen crawl from a previously unknown Star Wars saga. Blame Lucas.

There is no way I would have forgiven Lucas if he'd killed off Han Solo. Hell, I barely forgave him for "Return of the Jedi" (all those damn puppets and fuzzy Ewok suits. It was like watching the Muppet Show for two hours. Crap!) And as for the prequels, I have already cursed his soul into the darkest hells. The Phantom Menace nearly put me to sleep - during the pod race!!!!! And now Lucas is boring everybody with his Anakin Skywalker fixation. Why the hell doesnt' he get back to his GOOD characters, like Han, Luke, Leia, Chewbacca???? He could animated them in CGI and invite the original voice actors to speak for them. But NO, he won't do that, he expects us to be happy with that crappy Clone Wars. I won't watch them. I'd sooner kiss a Wookiee!

If Kurtz had any value all those years ago, it's that he represented the closest thing to a collaborator that Lucas has had outside of Spielberg. That being said, I'm glad RotJ ends the way it does - without it, we would not have had the wealth of expanded universe properties that have been created since. And for Han to have died after the entire first act is devoted to his rescue? Absurd.

The Expanded Universe is absolute rubbish. Timothy Zahn's overrated novels read like juvenile fanboys' wet dreams. Mara Jade is a fanboy jerkoff pin-up girl. Admiral Thrawn is Tarkin-Lite. Does anybody really care that Han and Leia married and had kids named Jaycen and Jaina Solo? Oh and they killed Chewbacca in the EU. Crap. Just pure crap. If it wasn't in the movies it isn't canon. Unfortunately that means all the crap in the Prequels happened as much as I'd like to pretend that it didn't. Screw the Ewok Yub-Yub hoedown. Jedi should have ended with Judas Calrissian kamikaziing the Falcon into the Death Star's main reactor and redeemed his sorry TBG ass.