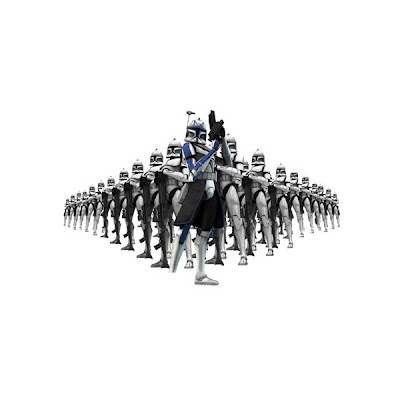 The Cartoon Network has announced when we get to see the premiere of Season 3 of the Clone Wars...

I wonder what season we get to find out what happens to Ahsoka? Now that's an episode I want to see. Perhaps Jar jar can join her? Imagine the possibilities. Hmmm.

The season two finale of Star Wars: The Clone Wars was the highest-rated telecast of the season among all key kid demos—2-11, 6-11, 9-14. The one-hour special also took the #1 spot as the most-watched telecast of the day (May 2) among boys 6-14, and #1 for its timeslot with kids 6-14 versus all television. Star Wars: The Clone Wars is a thrilling, weekly 30-minute “mini-movie” created by the talented artists at Lucasfilm Animation.

Mystery, intrigue and adventure await our heroes with all-new action-packed episodes of Star Wars: The Clone Wars. As war continues to rage throughout the galaxy, the dark side grows even stronger and the Jedi Knights are pushed to the breaking point. The lines between good and evil become blurred as secrets are revealed, truths are questioned and alliances are betrayed. Loyalties are tested as new enemies emerge and heroes rise – and fall.

In this transformative new season of Star Wars: The Clone Wars, surprises wait at every turn, the fate of the galaxy hangs in the balance and the destiny of the “Chosen One” will at long last be uncovered. Thrilling, unpredictable and often humorous, the exciting new adventures of the Star Wars Saga will captivate fans of all ages.

I'm sure Decadent Dave is warming up his DVR as we speak...

I also look forward to seeing what happens to Ahsoka.

And I hope it's dark and grisly.

I find this these comments disturbing. Why would you want to see any life end. How can you be so callus towards others. What if they wanted the same done to you?

Most regretful. Please rethink you're beliefs.

Pfffft lol. It's a CARTOON lili!! Please rethink your thoughts.

You guys do realize not every Jedi died during the Clone Wars, right?

From all the posts I've seen of Decadent Dave, the last thing he's going to do is dvr this piece of banther fodder.

You got that right.