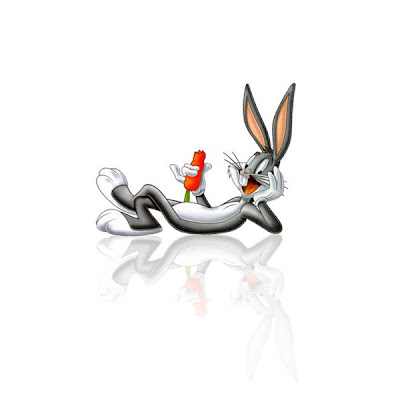 We know the problem with Suits is most have no brain, but some have no soul...

If you haven't heard the news, Warner Bros. has hired a writer to come up with a live-action/cg-animated film starring everyone's favorite rabbit, Bugs Bunny. Now, I'm not against a film featuring the famous bunny. I think it's actually a good idea, but not some hybrid cg film. I don't think a computer version of the classic character would do him any justice. A full length, hand-drawn, animated feature with a proper story could be a great way to introduce him to a new generation, while not totally offending long time fans.

And it's not a total revulsion of making it with computers, as I happen to actually think they were spot on with the new Road Runner/Wile E. Coyote cartoons that they've just started making. These are examples of how you can adapt certain characters to CG and make it work. But not all characters will work this way. I don't believe that Bugs works in CG, and I fear the bastardization of his look if they follow the same example that the new and downright horrid trailer for "Yogi Bear" does. It is another case of a studio filled with bean counters that only see numbers, but not the wake of carnage their decisions will create. These Warner Suits need to see a shrink.

comparing your perceived misuse/abuse of a cartoon character to rape makes you look like an ill-informed asshole.

Just be glad I didn't use the original tag line for the article...

Anonymous, your response makes you seem like an ill-informed asshole.

In the geek world it's commonly used term to refer to something like this as being raped. The most used one is the one fanboys direct at George Lucas: "You raped my childhood!"

So, if you knew this, then you'd know what Honor was using the reference in regards to.

If you think that by using such a term he's insensitive to rape victims then you really are a clueless PC twit.

Card carrying member of the nerd militia here: just because a phrase is common, doesn't mean it's okay. Rape still means rape, even if a community or subculture has decided it is okay to use it in what they have deemed an appropriate or acceptable way.

I'm not offended when I hear it used, but I'm also not a victim of rape. One who has suffered such a fate, however, might find that having their bodily and mental injury flagrantly (no matter how non-ill-intentioned) compared to the abuse of a cartoon character a little bit hurtful/insensitive/crude.

I'm never, EVER a fan of censorship, but I am a huge fan of caring about other people. And sometimes that involves being acutely aware of what you're saying. Even if it's about Bugs Bunny.

Yeah, get a life people.

They are raping Bugs. If you don't like it, don't read it.

Oh jeez, where were you guys when Space Jam and Looney Tunes: Back in Action came out? They've been abusing Bugs for decades. Who even cares about this movie?!