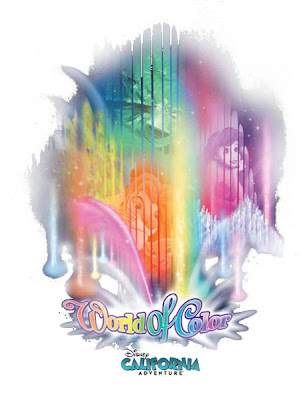 If you've been to DCA over the summer since World of Color premiered, then you've seen a noticeable change in the atmosphere...

It's not just the legion of walls or visible details. The new nighttime show has changed the perspective of how most people view the Disneyland Resort's Second Gate. The show has made people who never thought about coming under those ugly entryways take the journey past them. And when here, many of them have actually liked much of what they've found. Don't worry and think that the Suits are now going to stop the Extreme Makeover because it's not needed. That's not the perception. If anything, this will help Imagineers when asking for a few extra bucks for a project. It may even restore a few lost details that have been pushed back.

But back to that atmosphere. I've heard a lot of people that have seen WOC actually say they preferred it to Fantasmic!, which I never thought I'd hear. Now, I'm not saying it's better or worse, I like both shows for different reasons. One is enclosed and intimate with stage performers and the other is large in scale and filled with technological wonders. I know some people are upset at the lack of narrative elements to the show, but Steve Davison's show still has a story. It's changed since the testing phase where certain things worked and others that they thought would, didn't. The character that pulled all those scenes together, Squirt, still makes a muted, but surprising appearance. But the show is divided into emotional themes. Five themes to be specific: Adventure, Friendship, Courage, Fear and Love. I won't break them apart scene by scene, but if you watch the show, you'll be able to tell where one theme ends and the other transitions in. And the park's water extravaganza isn't the only thing that is transitioning here.

Come next week, Disney's Wall Land goes into high gear, and it doesn't let the pedal off the gas until well into next year. The front entrance will go under the knife at the beginning of the year, and guest will enter/exit through that side entrance into the Golden State area. The next couple of years are going to be more confusing and difficult as people are prompted in all directions as they avoid the massive amount of construction. But when the walls come down at varying times, between April of next year and the April after that, a lot will have changed in this park. And it'll be a Disney Park, a decade later than it should, but it'll finally be here.

What you've been seeing in the parks for the last two months is just a preview...
Posted by Honor Hunter at 8:05 AM

And hopefully then it's Walt Disney Studios in Paris' turn to become the true Disney park it needs to be!

I think you might have meant Golden State area, not Golden Dreams, the attraction removed from the Golden State. Either way, you are suggesting that the decision is now to enter over between the GCHotel and Soarin' instead of replacing the current entrance in 2 phases, left and right.

"And hopefully then it's Walt Disney Studios in Paris' turn to become the true Disney park it needs to be!"

Wouldn't that be nice?

And hopefully the Muppet theater will be gutted and Mickey's Philharmagic will take its rightful place.

I agree Muppets should be gutted but not replaced with Philharmagic. That structure along with the huge spac directly in front of it that used to be fastpass distribution should be turned into another large family attraction.
Philharmagic would be perfect as an addition to Animation attraction.
I suggest they gut out the turtle talk area. that theater used to be much bigger. Then extend the space out back into part of the backstage area. Philharmagic would definately bring in more people that could enjoy the awesome lobby of that structure

How about a brand new 3D film? I haven't noticed what all the fuss is about PhillarMagic.

After taking my first trip back to Disneyland in 2 years, I was impressed with the changes I saw. Still a lot to go, but tue progress is great! And I LOVED World of Color!! Amazing!

I have to disagree completely. Fantasmic is the better show. Disney is all about story, where is the story in WOC? I have seen the show, and I do not see where the "emotional themes" are. After reading the post, I watched the full show on youtube. Still, after being told the colors and the themes, I cannot make them out until the ending one of love. The show does need a narrator, either present or voiced, because right now, it is a hodgepodge of effects that have no re-watchability.

I look forward to seeing the new changes and reimagineering of DCA.

Haven't been back to DCA yet. I went there a lot from 2003 to 2007 when I had annual passes. It was fun to enjoy short lines. I intend to avoid the construction until 2012. I can certainly wait. Why the rush?

I haven't seen World of Color myself, but several friends of mine who are Season Pass holders and huge Disney fans have been hugely disappointed with WoC, to the point of almost disliking it. I'm still waiting to go see it for myself in person.

The "enclosed" show you're writing about must be Aladdin (it sounded at first that you were referring to Fantasmic!).

WOC is nice eye and ear candy, but it doesn't hold a candle to Fantasmic (when the freakin' dragon is fully operational); and waiting in line three times to view it is inexcusable. I enjoyed the Glow Party more. Unfortunately, I have been WAY too disappointed by TWDC's huge promises followed by dimished returns and incompetence towards the guests WAY too many times to share your optimism for DCA's transformation.

Honor, Al Lutz reported on Miceage that the current entrance to the park would be kept, and that the idea of a side entrance through the Golden State are had been abandoned. According to him, Buena Vista St would be built one half at a time, with the other half of the street and half of the turnstiles remaining open. Have you heard this, or is the side entrance through the Golden State still being considered, as in your article?

Also on unrelated matters, what are the bothans saying about changes to Mystic Manor in HK and the Fantasyland expansion in Orlando?

During our week-long vacation down to the DLResort this past July, our family "liked" WoC when we saw it...once. But we never felt any desire to muddle through the whole viewing mess to see it again.
However, we did see (and LOVE) Fantasmic more than 3 times! (Including doing the preferred dessert seating show one time!)
It would take a lot for us to return to DCA... it just didn't feel like a Disney park at all. (And GlowFest clinched the feeling with it's gawdy colors and loud music.)
Our opinion was they should take the "show" picture scenes out of WoC and just make it beautiful colored fountains that you can view from any vantage point around the lake... not just crammed in like sardines... forced to stand throughout.