The Beginning Of The Convergence... 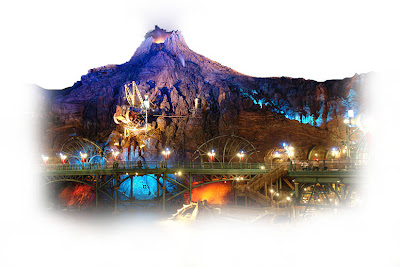 Remember how I was talking about with the World Wide Web it was going to be difficult for Disney to hide what it designs for the Oriental Land Company? I got a ton of e-mail related to that. Most of it was positive. Well this is sort of a continuation of that... only more of a practical demonstration. I call this the beginning of the convergence. Basically when a tool comes along that gives you knowledge and ability and is combined with action... there is a meeting, a convergence so to speak of forces that creates a form of "social corporate activism".

With fan websites and blogs you can get a better perspective of what is going on in the world outside America. Not just Disney, but everything. Of course, this being a Disney blog we're going to focus on just the Mouse. Years ago, the Suits could have gotten away with providing top-notch design work for TDL and then giving the American parks a sub-par version because we had very little way of seeing or hearing what was over there. It's with this in mind that I felt a demonstration was in order.

Fellow Disney Geeks and fans I give you...

Yes, I know most people have heard of this website, but it's a living, breathing textbook example of what I was talking about. Go over there and type in something you want to know about Disney and hundreds of videos instantly pop up. Sure many of them are crude and the quality is bad or the sound is horrible. But you have to look beyond the trees to see the forest. This is in its infancy. By the end of the decade, many of these people will have hi-def cameras with better sound and professional editing systems. Many of these people will be making ads or infomercials for the Mouse without any blessing from Burbank. They'll be making highly critical videos as well. This is another example of the "Virtual Shareholders" philosophy that I talked to you about a while ago. We may not own shares of the company, but we can shine a spotlight on parts of the company that we feel don't measure up to Walt's exacting standards. We may not have a tangible vote, but we can influence how those that do vote. We can shine a light of truth on things... keeping them honest, so to speak.

Now I'm going to posts several articles over the next couple of weeks that will provide you with samples of videos that show what the Mouse can and should do. Some are bad, most alright and a few are almost professional. But all are informative and enlightening as to where we stand in terms of the quality trail of WDI. Since I've talked quite a bit about it before, I felt it appropriate that I show you some videos of Tokyo DisneySEA. I've broken them down into several sections.


Now here is a fansite video that someone made which shows the promise of what the future holds. This showcases the rides in TDS's Mermaid Lagoon area. I think this is my favorite that I've found so far.

One of the most popular rides in the park lies in Mysterious Island. It's the Journey To The Center Of The Earth ride. And this is a video a fan made of the ride done to the Beatles "Getting Better"... it's pretty good. This is a brief panoramic view of Mysterious Island. And least we forget Mount Prometheus... this is a very active volcano.

Here is a rough video of the Indiana Jones Adventure: Temple of the Crystal Skull.

Least we forget the Tower of Terror ride that is in Tokyo.

Some of TDS's shows are simply amazing and can be seen in these videos, but none of these will do justice to actually seeing them in person... that being said, it's really impressive to wathc these shows because it shows you the quality of productions they put on in Japan.


Here is a video showing the beginning of the BraviSEAmo! show. And this one shows BraviSEAmo!'s finale.

This is one showing the TDS Water Carnival ETERNO.

Oh and let's not forget that the OLC makes commercials for it's parks. Here's one.

And we have one displaying the entertainment in the Mediterranean Harbor.


Christmas is a great season to celebrate anywhere... it's even better at a Disney Resort and best at someplace like TDS's Christmas events... take a look at last years Christmas Celebration.


This is a commercial made for the 5th Anniversary of TDS.

This is just a sampling of what one can find and how as I've said before... quality or mediocrity, have no place to hide.
Posted by Honor Hunter at 3:16 AM

Those videos are awesome! Man, I hope DCA gets half the detail and shows that TDS has.

I hope Disney listens to all us die hard fans and really understands that we want and expect that level of detail in the United States as well. California Adventure attendance would break records if they would actually do it right instead of trying to just get by. My mouth dropped open when I saw pictures and video with the level of detail that went into TDS. Thanks to your blog or I never would have known. The colors and props and level of detail was more amazing than anything I have ever seen! But I also felt sad that they didn't think we were worth the effort or that we would appreciate it here in the US. I am dying to see something that spectacular here. I hope Disney is reading this and it is starting to sink in. Horray for them for realizing what a flop DCA is at this point in time.

Youtube is a great way to virtually visit other theme parks. I use it to ge ta Disney fix or for planning a trip. Unfortunately, not a lot of hotel videos out there....