Disney Down With Decadence... 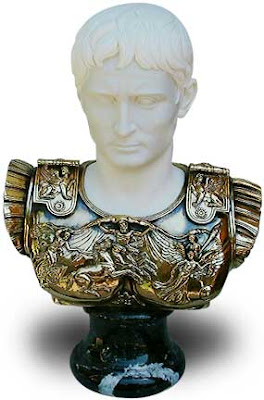 It appears that producer Scott Rudin has bought the rights to make a film version out of Robert Graves' sweeping Roman Empire novel, "I, Claudius". The Uber-Producer paid a hefty two million dollars for the rights to do so... and those aren't Disney Dollars.

Leonardo DiCaprio is said to be interested in starring and William Monahan("The Departed") is thought to be in line to adapt the novel, but no deal has been set as of yet.

What does this have to do with Disney you ask? Well, Scott Rudin's development deal is with the Mouse, so more than likely this will be a project for Disney's Touchstone Pictures label.

The novel, which was written in 1934, surrounds the Emperor Claudius who ruled Rome from 41-54 AD. It covers an extremely dark and decadent period of the Roman Empire where incest, cannibalism, paganism and just about every other "ism" was practiced... "Gladiator" it ain't. It makes "Rome" on HBO look tame by comparison. The book had previously been adapted twice before, most notably the BBC miniseries starring Derek Jacobi and John Hurt... oh and some guy named Patrick Stewart in 1976.

No word as to when a director will be attached as Rudin is trying to line up his script first. Expect this to be something seen in the later part of this decade should it get put on the fast track... should it not, we could always apply it to our "Forgotten Mouse Tales" posts sometime in the future.

That bust is not Claudius.

That's right... it's a bust of Augustus. I simply like the pic better than any statue or photo I found of Claudius... and it works with the story. The novel's time-line covers the period from the end of the first Emperor Augustus' reign to the crowning of Nero.