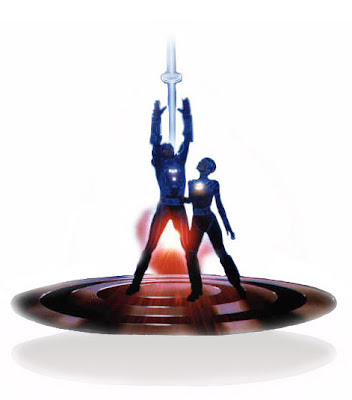 It appears the Mouse is planning on finally putting together a sequel to its 1982 film, "Tron". They are in final negotiations with director Joseph Kosinski, whose mainly known for his stylish commercials. The film would not be a reboot but continuation of the original. Sean Bailey is producing via the Live Planet banner, as is Steven Lisberger, who co-wrote and directed the original film. Kosinski will be directing Warner Brother's "Logan's Run" remake before moving over to Disney. The script is being written by "Lost" screenwriters Eddie Kitsis and Adam Horowitz, Kosinski will have input on the story which Disney Suits are mum about. The property is being eyed for a 2010/11 timeframe.
Posted by Honor Hunter at 8:23 AM

Tron sucked. I hope the sequel isn't so cheesy. Why is it going to take until 2010 to come out? That's almost four years, even Star Wars came out every three years.