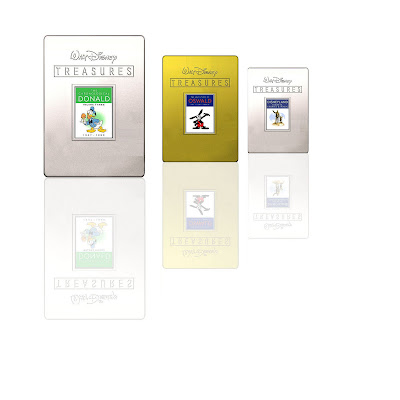 I know it's been reported before and elsewhere about the Walt Disney Treasures featuring Oswald the Lucky Rabbit, the Chronological Donald, Volume 3 and Disneyland: Secrets, Stories and Magic, but they've finally released the official artwork so I thought it might be time to refresh everyone's memory. After-all... December 11th is just around the corner.

Chronological Donald, Volume 3 - Features everyone's favorite navy-attired duck in Walt Disney Productions, solo shorts dating 1947 through 1950. This is the one I'm most looking forward to since DD is my favorite Disney character.


Oswald the Lucky Rabbit - Along with the Alice shorts, and before Mickey Mouse, the legendary and rarely-seen "Oswald the Lucky Rabbit" was Walt Disney's first big animated creation, and having recently returned to the Disney fold(courtesy of the Al Micheals deal), comes out of the vault for the first time ever on DVD. These silent shorts were made from 1926 to 1927 with Walt's personal touch, are revitalized with a brand-new score made specifically for this seventh installment of WDT.

Disneyland: Secrets, Stories and Magic - is a comprehensive look at the "Happiest Place on Earth." The centerpiece of this volume is a new documentary with archival footage, including Walt's own words, as well as new interviews revealing the magic and manpower behind one of the world's most famous destinations.

As in the past, each volume is hosted by Leonard Maltin. Each volume is individually numbered, with an authenticity certificate, and an exclusive lithograph in the collectible, unique packaging tins and available in a limited supply.

Now you all know what to ask Santa for...
Posted by Honor Hunter at 4:25 AM

oswald the lucky rabbit...now I have a new name to call the rabbit on the lucky charms cereal box :-)

that's pretty neat that these have been released, i certainly would be interested in seeing some of the shorts.

Why is there no other information out there on the Disneyland disc other than "the centerpiece"?

Are we going to get repeats from Disneyland USA like we did with "Your Host, Walt Disney"? Will it include the Tomorrowland and New Orleans Square '67 episode (part of which was featured on the PotC first DVD)?

The vagueness of what may be included is annoying the crap outta me. The possibility that I'm going to get a disc full of repeats just to get the new show keeps me up at night...