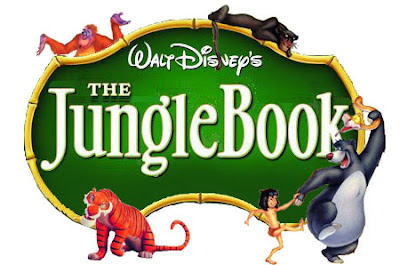 Walt Disney never got to see this in theaters... he passed away almost a year earlier the previous December. But it was the final work that he produced. It was a great film, like so many others before it. The film was filled with wonderful characters, an engaging story and memorable songs.

It was based on "The Jungle Book" by Rudyard Kipling. But the film is loosely told according to Kipling's story and leaves out many characters while taking a far less dark tone. The film was directed by Wolfgang Reitherman(whose own son Bruce played the voice of Mowgli). The story was by Larry Clemmons, Ralph Wright, Ken Anderson and Vance Gerry, based on Rudyard Kipling's "Mowgli" stories in The Jungle Book. Of note, the number of classic Disney songs that can be found here, including "Bare Necessities" and "I Wanna Be Like You" are some of the most charming. Most of the songs are by the Sherman Brothers(Richard and Robert). They were not originally supposed to do the songs, but came in after Walt was unhappy with Terry Gilkyson's work and started from scratch. The only piece of Gilkyson's to survive was "The Bare Necessities" which was the only song of his that had the "upbeat" tone that Walt Disney wanted. Also interesting was that the song Kaa sings "Trust in Me" was based upon a song entitled "Land of Sand" that had been written by the Sherman Brothers for Mary Poppins, only to be cut.

This film is one of my all-time favorites. It shows the wonder and genius that is Walt Disney. This wasn't the first adaption of the "Jungle Book", that was in 1942, or the only one by Disney... there was a live action version done for the Mouse in 1994. It was, however the only one done by Walt Disney.

Look forward to getting this on DVD in October. Maybe I'll see you in line?
Posted by Honor Hunter at 4:18 AM