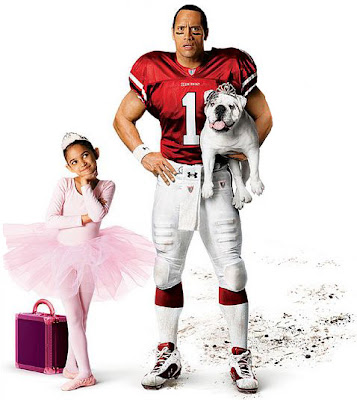 Walt Disney Pictures "The Game Plan" starring Dwayne "The Rock" Johnson as a self-absorbed superstar quarterback opens up today against Universal's "The Kingdom". While it's likely "Kingdom" will be on top, it remains to be seen if "The Game Plan" can pull in strong numbers at number two this weekend. The last Disney movie that came out during the summer was "Underdog", which seriously underperformed(I was worried about that one from the moment I saw the stills and knew it was doomed upon seeing the trailer).

Another movie that's in limited release right now, opening up last Wednesday is "Into the Wild", directed by Sean Penn and based on the best-selling book by Jon Krakauer. I hear this one is amazing and plan on seeing it next week.

So tune in Sunday and see if an egotistical professional football player can overcome terrorists fighting FBI agents. Can you smell what the Mouse is cooking?
Posted by Honor Hunter at 5:18 AM