Mutt Williams and the Search for Elvis... 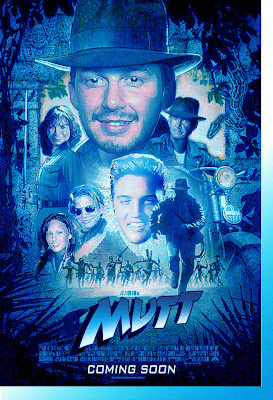 Let's see if the film itself stays alive. Lucas continues be the head of his creative empire and in my opinion that's one of the reasons he's only made mediocrity since the 90's(maybe longer)...

There's an interview up over at MTV's Movie Blog where he discusses the talk about turning over the Indiana Jones franchise to Junior... or is that Junior-Junior? Ahh, the heck with its. Shia... turning it over to Shia.

I don't know if Lucas is feeling the heat or just having a momentary lack of confidence in going forward with "The Adventures of Mutt Williams".

Indy 4 was so bad it made The Phantom Menace look like The Empire Strikes Back. Mutt Williams might possibly become the lamest action hero of all time.

Indy 4 tainted the greatness of Indiana Jones. Please George, taint it no further. I'm begging you.

As far as I'm concerned Indy 4 is not an Indiana Jones film. For me, it isn't cannon.

He's like a senior citizen, but one that needs his creative drivers licensee taken away.

Looks like Shia will be losing a finger from his crushed hand injuries sustained in his DUI car crash so he won't be able to hold the whip anyway. Michael Bay has to write a scene in Transformers 2 to explain how he loses his finger.

I always scoffed at the Star Wars fans for whining about how "Lucas raped my childhood!"....

Now that poster is f-ing funny!