You're Not Expendable, Rambo... 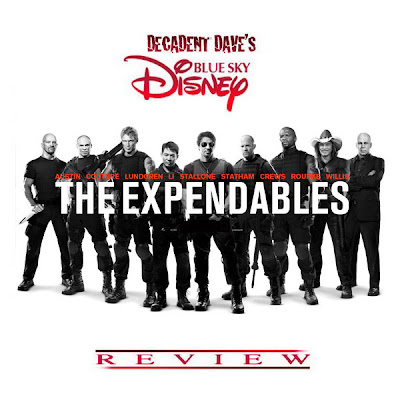 When I was a kid, heroes were larger than life. They still are today only with just one exception albeit a pretty significant one… in those days, Men were Men. They weren't pretty but they exuded their God-given male born testosterone with every ounce of testicular sweat dripping on celluloid. For a boy growing up in the 80's they were the male role-models and father figures that inspired impressionable pre-adolescent boys into shaping their adult manhoods. Those were the days of yore.

The Expendables isn't a great film by any stretch of the imagination but it knows exactly what it is trying to be and doesn't pull any punches. It tries to be the Magnificent Seven of the modern action movie but doesn't quite hit its mark. It's more like the Magnificent Four and a Half (Stallone, Statham, Lundgren, Austin, and Li). The rest of the ensemble more or less being, ahem… expendable. My friend and I once had a similar idea for a movie that would pit all of our favorite 80's action stars into one no-holds-barred-royal-rumble-
of-epic-manliness which we appropriately called "Cajones" but that was back in the mid-90's when there was still a chance to see most of these larger-than-life-nut-swingers together onscreen in their prime. The fact that Stallone, now 64, can prove that he still has what it takes and show the younger generations how to make an action movie proper after two successful comebacks with his acclaimed Rocky Balboa and Rambo is a testament that there is still not only a demand but a primal need for REAL movie star icons like Stallone that are legends who defy their generation and age.

There is only one thing you need to know about the paint-by-numbers plot and that is this: These titans of manliness have all come here to chew bubble-gum and kick ass, and there is a whole lotta bubble gum to go around. When the blood and guts start flying it makes Peckinpah look like Walt Disney. If that is the kind of movie you are expecting to see you won't be disappointed. Perhaps the biggest fault with The Expendables is that it never quite lives up to itself. Arnold Schwarzenegger's cameo feels like it was thrown in just for the sake of having the three biggest 80's action icons together at last onscreen for a Hard Rock Cafe Kodak moment. It just feels like 'The Guvinator' shows up to give his quick endorsement before going back to the office. Fortunately Sly has much better things to do these days than bankrupting the state of Culifornia. I was never particularly a fan of so-called "professional" wrestling for all of its phoniness so guys like Stone Cold Steve Austin never really appealed to me but I'll take him and UFC's Randy Couture any day over any so-called leading male action star in Hollywood today just on sheer testosterone levels alone. At least Mickey Rourke showed that not all of professional wrestling is fake with "The Wrestler" but "Iron Man 2" hardly qualifies him as a bona fide action-star, more like Harley Davidson without the Marlboro Man. One look at his fugly face and you can see that his days of "9 1/2 Weeks" with the ladies are long over. Jason Statham is apparently the most masculine male action star Hollywood currently has to offer up and that's not saying too much with a resume consisting of "Lock, Stock, and Two Smoking Barrels," "Crank" and "The Transporter" series but I guess baldness apparently qualifies him in the testosterone brigade along with Bruce Willis whose days of headlining as an action star were washed up with the last "Die Hard." The truly expendable were those 80's action icons who didn't quite make the cut like Chuck Norris who for whatever reason was unable to attend Sly's little shindig. As a kid I probably watched every action film that Chuck starred in like "The Octagon," " Good guys Wear Black," "Lone Wolf McQuade" and "A Force of One." You can't think of the 80's without bringing up Chuck Norris, or the poseurs like Jean-Claude Van Damme or Steven Seagal, all of whom are conspicuously MIA. Apparently Van Dammage was offered a part but he thought the script should have catered to his ego as well as a bigger paycheck so Sly made his part Expendable.

The Expendables is a fun salute to the 80's and a throwback to the days when action films weren't trying to be politically correct and were all about blowing shit up, flexing their muscles, delivering the one-liners, kicking ass and looking cool. To that end, The Expendables is a blast, but not a slam dunk. It's worth a matinee out of pure sake of nostalgia or a rental. If The Expendables accomplishes one thing other than winning the weekend box-office it should be this: To send a message to the studios that there is a hunger for masculine male action icons who are on the endangered species list and to ensure their survival in the 21st century which has been corrupted by forgettable momma's boys and blood sucking vampires of the Twilight generation.
Posted by Decadent Dave at 12:38 AM

I saw this at a midnight show and it reminded me of when action films were action films. Movie makers didn't fret over offending this group, or that group. They tried to entertain you.

Am I the only one that finds these trips back to the Glory of the 80's just a bit much?

It seems a bit juvenile to have the images of all these muscle filled actors be our heroes.

Haven't we grown beyond that?

Absolutely not. I felt like a 14 year-old kid again and that's exactly what I wanted!

Going to see this tonight. Can't wait. My only regrets are that Arnold is not in it enough, as well as Kurt Russell and Chuck Norris showing up. That would have made it such a manfest explosion.

"...Iron Man 2" hardly qualifies him as a bonnified action-star..."

(Misspellings are usually no big deal, but this one stands out, with outstanding bona fides.)

One word mispelled and that's all you focus on???

What about the movie or the review? Keep up the work, DecDave. I couldn't agree more.

Loved it. Agree that Kurt Russell would have been great. Tango and Cash together again! Maybe in the sequel?

If Kurt Russel and Chuck had been in this film the Earth would have been annihilated in a cataclysmic apocalypse of testicular proportions.

Decadent Dave seems really into nutsacks and testicles in this review.

Well you obviously don't have a pair.

I like the concept but the cast is definitely B-grade. If these actors were all Stallone could muster, his star is fading or he needs a better rep who can smooth-talk people into signing on the dotted line.

Other then Stallone, who is honestly an action star amongst this group?

* Couture? No, he's a UFC "Whatever they're calling that sport" nowadays.

* Lundgren? "Action star" might be stretching it much, more like "Direct-To-DVD" star. Seriously, I can only think of "Universal Soldier" and "Rocky IV."

* Li? I'll grant them this - He fills the pre-requisites for "Asian action star" but if that's all that's needed for membership, then you could fill a convention hall with such actors.

* Statham? He's a "modern" action star and, sadly, probably the closest to an actual "action star" on this cast besides Stallone.

* Rourke? A star but not an action star.

* Willis? A bona-fide action star but hardly in this film. Probably agreed for his "blink and you'll miss it" role more because of Hollywood politics then anything else.

* Ah-nuld? A-grade action star but his appearance makes Willis' cameo look like an one-man broadway show in comparison. Wouldn't doubt it if he kept his car's engine running when he walked in for his cameo.

This cast feels more like a "Dancing With the Stars" roster of action heroes then an actual roster of action heroes. Where's Van Damme? Segal? Norris? I know that Bronson & McQueen are dead and a bunch of other credible action stars (Gibson, Eastwood, Ford, Reynolds) are long in the tooth but what about Kurt Russell? Heck, Michael Biehn would've been an easy upgrade to this cast! Travolta (yes, THAT Travolta) would've been an easy upgrade to this cast! Snipes would've been an upgrade (Although I can't remember if he's in jail or not).

I'll see it on cable someday.