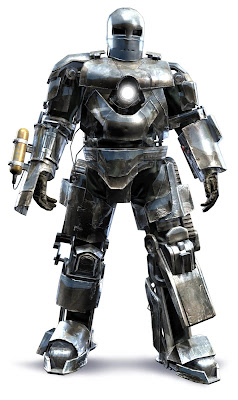 The third and last (as of now) time Robert Downey Jr. plays Tony Stark may be a shade different...

The other day someone leaked what sounds like the trailer for Marvel Studios "Iron Man 3" would be like. It seems to follow the tone of what some our saying about this third outing for the billionaire/philanthropist-vigilante/hero. It's going to be a darker, more harrowing tale of the comic character. Not so much, as following Stark down the neck of a beer as in "Demon in a Bottle," but as in watching a character take a stroll down a road where everything he has is stripped away from him.

Kevin Feige has sad as much when he was talking about taking Tony Stark back to that cave we saw him in the first film. But from what I hear, I don't think people realize how far into that dark hole he actually means. From what I'm hearing, this film will be closer to "The Dark Knight Rises" than "Avengers." While I don't believe it'll actually be that dark, I believe it'll cross over into territory near it. If you've ever read or seen the comic/motion comic "Extremis," then you'll realize that this Iron Man isn't going to be making as many flippant jokes.

We're going to see him brought back to what makes him who he is. And considering he's just seen an attempted alien invasion of Earth, things have changed. How could your world not be altered after experiencing something like that? And with Shane Black in charge and no writer's strike this time, I expect a script worthy of the actors in this film. I've made no attempt to hide my belief that this film could be the best of all three Iron Man films, and I'm certainly more interested in seeing it that the second outing of Marvel's God of Thunder. Black taking over the directing of the franchise is a primary reason why I feel that way (Kiss, Kiss, Bang, Bang is awesome, and the reason Downey got the role of Tony Stark in the first place).

So now we wait to see a trailer showing us the third installment of the film that started Marvel's foray into the control of their own filmic destiny. The chances that we'll see RD Jr. in an Avenger's sequel is a little higher now that the company has shown a willingness to re-up Joss Whedon for that film. Will they sign him for just "Avengers 2," or another round of Iron Man films? That's a question I don't think even Tony Stark knows the answer to.

But I do believe it's going to be a dark journey toward the light for this character, and this Disney division's future films...

Seems to me all of the franchises run out of steam the third time around. Look what happened to the Dark Knight Rises. You had a reluctant Bruce Wayne coming out of retirement to be Batman again and now you have Tony Stark who wants to quit being Iron Man but will have to come back to face the Mandarin. Sounds like another franchise where the writers/producers are exhausted and just fulfilling contractual obligations. Iron Man 2 suffered from being rushed but IM3 will suffer from being tired and the ideas have exhausted themselves. Downy should stick with Avengers.