A Detour In The Force...

I sense a disturbing disturbance in the Force... 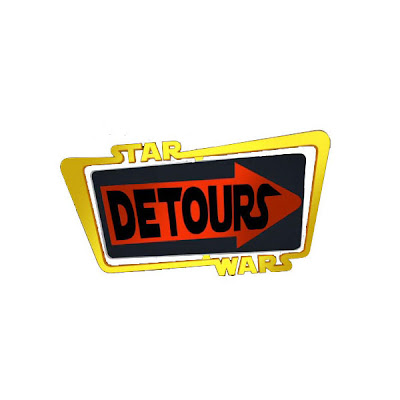 I really don't know exactly what to think about this...

It looks like "Robot Chicken" does Star Wars or "Space Balls" if it was done in the Star Wars Universe, which shouldn't be surprising since this being made by the same people that did/do that series. It's clearly aimed at a younger audience than "The Clone Wars," but it does seem to have humor that will fly over kids heads. The question is, will the show fly over people's heads?

For more on the new show, check out its Star Wars: Detours Facebook Page and see some more clips and art. No word has been given yet as to where the animated series will land. Cartoon Network has been good for Lucas, so it might have the edge. I know that Iger and his crew wanted the Clone Wars series, but lost out to it. Will they try to get this for Disney XD? I'm not sure, but it's doubtful. It'll be interesting to see a full show of this and see how the story and jokes flow. Now, if Kathleen Kennedy can get the budgets to reasonable levels so we can get that live-action series.

Hat Tip to Gizmodo via /Film
Posted by Honor Hunter at 2:16 PM

The problem with Star Wars since "Sith" was released in '05 is that there is nothing fresh and "big." In other words, all I've seen in the seven years since the last film installment are parodies, spoofs, and kid-oriented tv shows with inferior animation. In order for Star Wars to be cool again, Lucasfilm should make something BIG and inventive. Maybe not Episodes VII, VIII, and IX, but that live action TV show is an absolute NECESSITY.

Who is asking for this? said...

I like the six movies, however, the rest of this stuff is unnecessary, and kind of dilutes the original.

This new thing is about as funny as a cheap greeting card.

I guess I don't get it. My son, 8 years old, loves clone wars. Is this really necessary?

Proof that Lucas is officially now a unic.

This seems...redundant. With the already existing "Robot Chicken" and "Family Guy" parodies of Star Wars, this doesn't seem fresh at all.

In fact, I think the LEGO Star Wars series was funnier than any of the jokes here...

How many times can Lucas beat a dead Taun-Taun?

Honestly...Lucas hasn't made anything worth watching since Return of the Jedi.