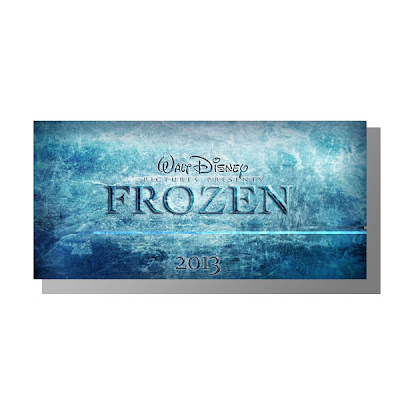 But very little is known in the public about it. While it is based on Hans Christian Andersen's "The Snow Queen," very little else is known about it. A lot of internal artwork has been produced for the film. Apparently, a couple of stills have leaked like the one above. Much of what I've seen out there is artwork from previous incarnations, not the current version. So what do we know about it. A few bits of info for you:

First of all, it's entitled "Frozen" as the above artwork says. Disney marketing wants to stay as far away from royal titles as possible for fear of young boys not buying tickets. Tangled reinforced this idea, at least domestically it did. Nothing with a Queen or Princess will make it out as a title. A title with King in it could make it out though, but nothing as of yet is in the production pipeline.

While it is based on that classic tale, it's very, very loosely based on it. Think along the lines of "Tangled" and how little it resembles the fairy tale of "Rapunzel." The bare bones of that story is all that is intact and the rest of the story is entirely original. But the script was well enough to get the green light and move it ahead of "King of the Elves," which is no longer in production. John Lasseter feels strongly about the story, and the direction that Chris Buck is taking the narrative.

Yes, it is computer animated, not hand drawn, but the style is quite beautiful and evolved from traditional graphics that we expect in these films. Think about the swirly painted sets/backgrounds in Tangled that appear like they were taken out of a classical painting. Frozen will advance and alter this as well, but in a different direction (but not as much as Paperman, which you'll understand when you see it).

But the film that comes out next year will show you that the current state of Disney Animation is quite healthy...
Posted by Honor Hunter at 11:58 AM

There were some character details the other day too! There's apparently "a goofy enchanted snowman named Olaf and a bizarre reindeer named Sven"

Thank you very much Honor!
I think Frozen could be a great movie... I hope disney will not ruin this movie with a sort of horrible humor like toilet humor - potty humor-scatological jokes... (I read Ralph will have a lot of potty humor and this is disgusting for me)... I HATE this sort of humor and I think a movie with this sort of humor is destroyed. I don't like Lion king for this sort of humor...
I hope Frozen have a more interesting and intelligent humor. I think Tangled or Cinderella or Little Mermaid have intelligent humor with no references of toilet humor... so I hope Disney will do a great immortal movie with this adaptation of Snow Queen...

I also hope to see a movie with great art in this... I remember Glen Keane dark version about Rapunzel with Fragonard and Rembrandt inspired design... I hope one day a studio will do a movie with this art.

Honor, is "King of the Elves" cancelled or simply delayed?

I have a feeling Disney will return to "King of the Elves" once they fix the story problems. I'd actually like to see them revive Ron & John's "Fraidy Cat", that would be an interesting project.

Sadly, the music from frozen will not be the Menken score, but the Lopez's, from the horrible Avenue Q. They're bland with music, and witless with lyrics. Let's hope they axe the score altogether and not make it a musical.

Hopefully, Frozen will have some iconic characters, a great story and some beautiful sounds. When Disney puts these things together, they do it better than anyone. King of the Elves may take a little time to get to the screen, but Frozen went through its own developmental hell to reach the point it is at. With John Lasseter behind the project, its problems can be solved.

I am having increasingly less faith in John Lasseter, after the disappointing Cars 2 and Brave. Tangled's success may have been primarily due to the fact that it actually felt/looked/sounded like a traditional Disney flick. Wreck It Ralph on the other hand... I don't know. I have the feeling that this is just a video game geek's present to other video game geeks. I am not a hardcore gamer, personally, but I am a lover of the traditional Disney stories that appeal to us all; I find the entire premise of Ralph to be... limiting.

Paperman, on the other hand, I like. A lot.