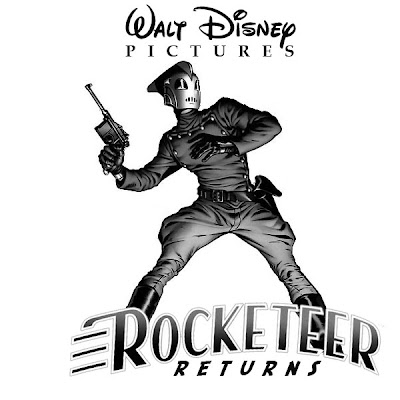 If what the Vulture says is true, then we're in for some fun films from the Mouse's live-action division. For those that don't know, the article says that one of the first films that Horn is working on is a reboot/sequel to the 1991 cult classic, "The Rocketeer."

This wouldn't necessarily be a sequel as a new film entirely. The project is supposed to go out to writers soon, and I pray they get talented ones that know the character, like the writers of "Captain America." As a matter of fact, get those two writers, and have Joss Whedon do a polish on it as well. Perhaps call up Paul Dini and give him a crack at it?

Perhaps this will be the unintended sequel that fans of the film have waited for. The character is deserving of another film, and there are great stories to be told within the world that Cliff Secord lives. Now as to who would/should direct it? I don't know if they'll go the tested route with a seasoned film director, or a new one that cut his teeth on commercials or some such. How about someone like Brad Bird (dreaming, I know), or Peter Jackson (really dreaming), or Matthew Vaughn (an interesting choice), or Jon Favreau (a bit too on the nose?), or Gary Ross ( who would be perfect for this if he wasn't directing another Disney project)?

And how about Cliff himself? I say give Jared Padalecki a shot at the role. He shares the same warm charm and genuine all-American appeal that Billy Campbell did. I think he'd play very well with a hair cut.

No matter who they decide on, this is a film I have and always will be waiting for...

I agree with all your director choices except that last one. Gary Ross? Did you see The Hunger Games? It was pretty mediocre and poorly shot.

You have great taste if this is the one you are waiting for!

Bring back Joe Johnston! The guy knows how to make an awesome retro period piece and gets this character like he did with Captain America and the first Rocketeer.

Gary Ross has a way of capturing innocence and inspiring the look and feel that the Rocketeer is built in.

Have you seen Pleasantville? Seabiscuit? I didn't think The Hunger Games was bad, but Ross would be a tonally good choice for the film. It's all fanboi stuff anyway since he'll be doing the Peter Pan film. And we don't even have a script yet.

I can hear Disney's thought-processes with this news:

"Oh, we've gotta do something Superohero-ish because Superheros are popular! How about another Iron Man movie! No, another studio is making Iron man 3... How about something that LOOKS like Iron man? Like what? I know, since we already raped Tron, let's rape another 80's-early 90's cult classic: Rocketeer! Fanboys will love it! And there's nothing more important to the studio at the moment than fanboys! It'll have all the same features as an Ironman movie so we don't have to do any thinking or major storywriting. Why, we can even make this a reboot! This'll be a quick and easy cashgrab!"

I really liked the original Rocketeer. However, I think the only way that it could be a hit today is if they gave it a "Pirates" treatment with supernatural elements. Also, has anyone noticed that they still play the great Rocketeer theme song at the water fountain show at Epcot?