The Boys Are Back!

Now, if only we had a time machine... 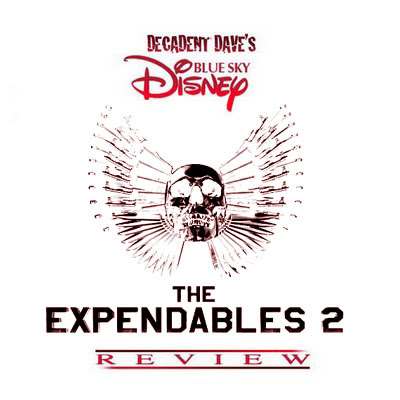 Let's get one thing straight. You don't go into a movie like The Expendables without knowing what you are getting yourself into. If you've seen the first film and enjoyed its larger-than-life salute to big 80's action stars then you know exactly what you should expect from the sequel. It's more of the same formula: Big on star power machismo, ammunition, and one-liners and simple on plot, exposition and intelligence. The bottom line is; you don't watch The Expendables expecting any Academy Award winning performances. If this doesn't sound like kind of movie that you would normally enjoy watching then you came to the wrong party.

The Boys are back: Sylvester Stallone as Barney Ross, Jason Statham as Lee Christmas, Dolph Lundgren as Gunner Jensen, Terry Crews as Hale Caesar, Randy Couture as Toll Road and Jet Li as Yin Yang while Mickey Rourke is out as Tool but the testosterone meter is still off the charts. Liam Hemsworth joins the team as the youngest "expendable" Bill the Kidd. The Expendables have been recruited by Church to stop weapons-grade plutonium hidden in a Albanian mine during the Cold War from falling into the wrong hands and it's time to bring in the Dirtier Dozen.

The muscle and star power are man-uped the second time around. There's much more Arnold Schwarzenegger and Bruce Willis this time who only appeared in smaller cameo roles as Trench and Church in the first film and there's more iconic 80's action stars that the fans have been begging to see like Chuck Norris as Booker a.k.a. the "Lone Wolf" and Jean Claude Van Damme as Vilain, and what an apropos "villain" he makes. It seems Steven Seagal is still the odd man out due to a publicized disagreement with the producer Avi Lerner, although when asked if he would be in Expendables 3 his response was "We'll see." Rumor has it that Clint Eastwood and Harrison Ford have already been approached for the third one as well with plans to acquire Nicholas Cage and Wesley Snipes to the Expendables 3 dossier.

Expendables 2 is a blast if you can appreciate it for what it is; it's the guiltiest kind of guilty pleasure and it makes no apologies for being what it is. The first one feels almost like a dress rehearsal but the sequel is bigger and a lot more fun. There are hilarious one-liners and bad puns aplenty and the chemistry between these legendary screen icons takes badassery to a whole new cinematic level. The epic showdown between "The Italian Stallion" Stallone and the "Muscles From Brussels" Van Damme makes it worth the price of admission alone.

Bring on Expendables 3! Yippi ki yay!
Posted by Decadent Dave at 7:32 AM

This article's first paragraph sums up why I have less faith in Disney and the movie business in general. If a film is macho and violent it is immediately described with the attitude "it's great! It's so fun to watch! You should watch it too!"

By contrast, a well-written and well-executed "girl" film is immediately shot down as something that "only appeals to a limited audience."

I'd rather have a root canal done than watch that crap.

I had a blast! Nothing like a fun, escapist 80's film with all my favorite action heroes.

I know where you're coming from, DD!

A film like THE DARK KNIGHT RISES is panned here, yet this garbage is praised? Give me a break. You guys are idiots.

Don't think they panned The Dark Knight Rises. They criticized the problems with the film but thought it was still entertaining overall. For a film by Christopher Nolan I expect more. For a Batman film it has problems. The Expendables is what it is. No need to criticize it for its obvious plot holes (or lack of plot), just enjoy it for what it is: mindless entertainment and fun.

This is one huge Hollywood turd. The fact that you morons like it says it all.

BTW, I agree with the other poster about The Dark Knight Rises. Don't quit you day job, you're a lousy movie reviewer.

You people that don't like this because you say it's stupid are just clueless.

It's mindless entertainment. Get it? Mindless. It's pure fun, with action heroes fighting the bad guy and winning. It's not meant to be a massively complex tale of a man's journey through his soul. Duh.

Loved the film and totally agree with Decadent D.

Get a life you whiners!

Forget all you haters. It's an action film, not Shakespeare. If you're not a big fan of 80's action films then this isn't for you. Go read War and Peace.

Dave, keep up the good work.