The Studio Without Fear...

Born again in the MCU... 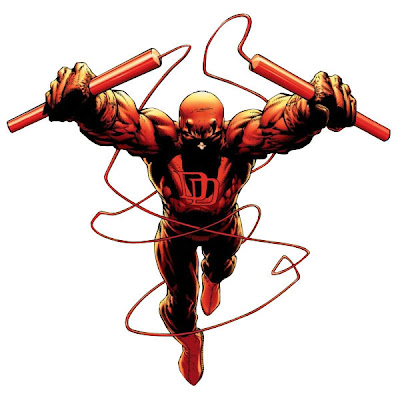 It appears another Marvel character may be coming home...

While earlier today there was talk of Marvel Studios in talks with 20th Century Fox about a character swap in exchange for an extension of the rights of another. In other words, a little longer to get filming on "Daredevil" for the rights to Galactus and the Silver Surfer (What, no Skrulls?).

But that appears to be premature. It seems that Fox is willing to let go of the Character and focus on their current reboot of the Fantastic Four. Their only interest seems to be a co-production of either a Daredevil film and/or a F4 film. And I can't image this being a deal that Marvel/Disney would be willing to do.

So if 20th Century Fox isn't filming by October 10, then the rights revert back to the Mouse, via Marvel. The Fantastic Four reboot has somewhere between a year and eighteen months before it runs out. So they appear confident that the Josh Trank's direction start over will be up by then. I wonder if Iger/Feige are crossing their fingers that this one falls apart as well? So this along with Ghost Rider will likely now be welcomed back into the Disney family. Ghost Rider hasn't officially been turned over yet, but with the box office returns of the sequel, it appear that Columbia won't be too eager to get another one going before the rights expire. And don't forget, all of Daredevil's villains revert back as well (Kingpin and Bullseye, etc.).

It'll be a while before "X-Men," Wolverine," and "Spider-Man" come home, but you can expect that Disney's lawyers will be counting down every second and making sure every word of the agreement is taken word for word. Any wiggle room to wedge these character from these contracts will be used to the limits the law provides.

But the clock is counting, and the dominoes keep falling...
Posted by Honor Hunter at 1:11 PM

If sony keep making Spider-man movies, will the rights ever come back to Disney?

Galactus and Silver Surfer could well fit into the Avengers Movies. So if Marvel-Disney does make a deal in this regard and does not get Daredevil, it is no big loss. Slowly but surely, the children are coming home. And that is not to say that arrangements can't be made for X-Men, Spiderman --- Disney/Marvel universe to interact in some joint Movies. The key will be $$$$$. If the price is right for all, we the viewer will certainly benefit.

Actually, according to Avi Arad Kingpin is at Sony with the Spidey rights and was a lone to Fox. However, I'm sure Marvel could get the character from them too.
I like how Sony/Marvel seems to have a good relationship; they agreed to put OsCorp in the Avengers, and Arad seems keen to work out a deal to include the new Spidey in MCU knowing it's good for both companies. So technically Spidey could already have been introduced for the MCU.
Fox can keep X-Men; they've built a good franchise and seem to be taking it in a great direction. Plus, X-Men concept works better solo than as part of the bigger universe (at least in film) IMO. Fantastic Four would be a great addition to the MCU however, along with Silver Surfer&Galactus. Also, you asked about Skrulls; some characters fall into a grey area where both companies can use them (these include the Skrulls and Scarlet Witch&Quicksilver).

But now that Marvel has Daredevil, they should abandon that Hulk show (not set in the MCU? Hulk belongs in the movies, and delToro is too busy with Hellboy3, Haunted Mansion & Doctor Strange films he should make). Marvel television should have Daredevil&Heroes for Hire as part of MCU showing the street level heroes (while their movies focus on the Avengers with a secondary series of cosmic movies).

Marvel needs to get back the Green Lantern too. Warner Bros. really screwed up that franchise.

Um... Green Lantern is DC not Marvel. Check your facts before you post your ignorance.

Now there is a possibility of the main character of the DC Universe jumping ship. The relationship between the Siegel/Shuster family are at extreme odds with DC/Warner Brothers to the point that the character, Superman, was literally divided up like the baby before King Solomon. (You get this part - You get that part) Knowing the skills of CEO Iger, wouldn't be crazy to see him negotiate with the Siegel/Shuster clan and come away with the rights. As for Green Lantern - he and for that matter Superman is not needed in the Marvel Universe.

I am interestedin Animation & graphics designing. Looking for advance animation course in delhi.Can you please suggest me some.Also do let me know what are scopes if i make it my career.