I shall pretend to be a fancy debutant... 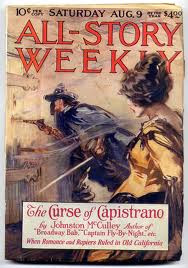 Ninety-Three years ago on this day the "mark" first appeared...

Author Johnston McCulley created a character that first showed up in All Story Weekly that captured the hearts of the magazines readers. Set in the Old West of southern California when it was under Mexican rule, "The Curse of Capistrano" told the story of a masked vigilante that fought the corrupt government and its oppression of the local people. All dressed in black, a flowing cape and mask were his image, but the mark that he left in his wake was his calling card.

Zorro was born on this day. In the 1950's when Walt was looking for material he could turn into live action shows for his television show, he decided to turn this character (whom had already been successful in film) into a weekly television series. Millions of children, young at heart or simply young, would turn in each week to see the adventures of hero that fought for justice and road off into the night. Happy Birthday, Don Diego de la Vega.

Now if Disney had only bought this character...
Posted by Honor Hunter at 8:35 AM

The 1998 mask of zorro could and should have been a Disney film.