Wheldon's World, we just occupy space on it... 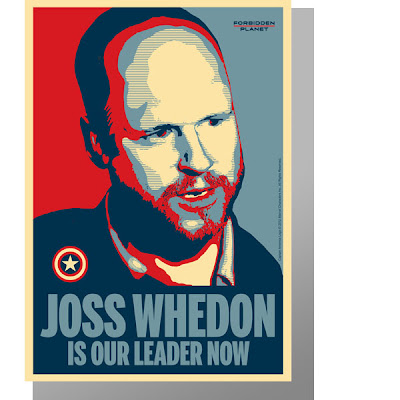 So the details are finally starting to come out...

Marvel has issued a statement regarding the services of Joss Whedon:

Joss Whedon has signed an exclusive deal with Marvel Studios for film and television through the end of June 2015. As part of that deal, Whedon will write and direct Marvel’s The Avengers 2 as well as help develop a new live-action series for Marvel Television at ABC. He will also contribute creatively to the next phase of Marvel’s cinematic universe.

This is uncharacteristic of Marvel. They've shown little loyalty to the directors/writers of their projects. Jon Faveau is the only director to come back more than once and no writer other than Whedon, I believe has worked on multiple films for them. This shows an enormous amount of respect for Joss and his vision for the MCU P2 as it goes forward.

The statement also lets you know that "Avengers 2" will be out before June 2015 since that is when the deal expires. It also talks about how he'll help out on the rest of the upcoming slate of Marvel films. So we could see him contribute to rewrites/polishes on several of the upcoming scripts. Which is great news for fans of the films. I can imagine that he'll be involved in "Captain America: Winter Soldier" because of his past association with it, but "Guardians of the Galaxy" could be something of interest as well since his "Serenity" work.

But the future of Marvel Studios just became a whole lot more positive...

Multiple writers have been re-used.

Zak Penn did drafts on both the Incredible Hulk and the Avengers.

Drew Pearce wrote their (back-burnered) Runaways, which got him a gig co-writing on Iron Man 3.

Don Payne worked on Thor, and did the first draft of the sequel.

I was mainly talking about working across multiple projects, as Zak Penn's script wasn't used as Whedon himself said it provided him nothing and he started from scratch.

I was mainly talking about coming in and doing revisions to others works, which I believe he's the only one that's done that. Many writers have been hired, but having one consistent writer coming in and rewriting several projects is unusual for Marvel.

I could be wrong, but thanks for the info regarding those writers.