New Book Of Mountains And A Mystery... 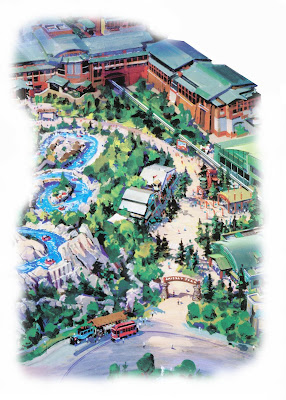 I've gotten lots of e-mails from people asking me about the new book: "The Disney Mountains", regarding some artwork inside that depicts Condor Flats with the makeover of it as an expansion of the Golden State area we all know is coming. Yes, that art is one of many blue sky pieces done for pitches to the higher ups. And while that pic is headed in the right direction, it's not exactly what will be happening to Condor Flats... it's close, but not quite there based on artwork I've seen.

Expect to see somekind of official press release about expansion later in the month, more than likely before the holiday season gets underway. When the walls go up in a few weeks, things should really start to get exciting. Stay tuned... stay patient.
Posted by Honor Hunter at 8:35 AM

Uhm. That photo there IS the photo he mentioned. Although it appears to have been cropped for his page.

When you say that it's "not exactly there," do you mean that what is shown is barebones compared to what's coming, or over the top? Can you give us some direction about where this image falls in the "final" scheme of things? Thanks.

I would love to hear what changes you have seen in artwork relative to what this image shows. To be honest, the differences don't seem that drastic relative to what is already there, except for a lot of green paint and some trees, etc. I'm actually kind of disappointed if that is how its going to look. There doesn't appear to be much change to the structural aspects of Condor Flats.