Was Kingdom Of The Sun... More Fun? 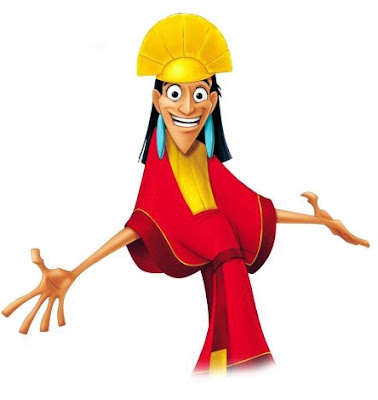 MousePlanet has an interesting article about a documentary made about the making of "The Emperor's New Groove" that focuses all the way back to when it was originally called "The Kingdom of the Sun". There's no way we're going to find out if it was better, although it is my belief it probably would have since TENG is one of my least favorite Disney films, but one thing is sure... it sounded really interesting.

The 87 minute documentary was known as "The Sweatbox" and unfortunately is not available for viewing. It sounds like a literal example of how to let Suits screw up a story. So what was "The Kingdom Of The Sun" about? How was it different than "The Emperor's New Groove"?

"Pacha, the peasant llama herder, was not a heavyset middle-aged married man but a carefree, good-hearted 18-year-old who was a dead ringer for Emperor Manco. (In the final version, the character is renamed Kuzco following Fullmer's horrified discovery of the Japanese slang term "omanco" that politely translates into the word "vagina.") A young Owen Wilson provides the voice for Pacha.

Sting wrote "Walk the Llama Llama" that Pacha was to sing as he led his trio of llamas down the mountainside and into the marketplace. There was concern that Hartley's clever lyrics were too sophisticated for an unsophisticated peasant boy who would never use words and phrases like "panorama" and "the perfect fashion statement."

Manco (voiced by David Spade) had grown bored with being ruler of his mountain kingdom so when he discovers the kindly llama herder who is his doppelganger, he decides to get away from his duties of state by switching places. Unfortunately, a sorceress named Yzma who has her own agenda turns Manco into a llama who cannot talk so Pacha must continue the masquerade.

The situation becomes more complicated when Manco's betroved, the handmaiden Nina, finds the arrogant and haughty emperor is now kind and funny. She finds herself drawn to the seemingly transformed emperor. Pacha also finds himself falling in love with Nina even though she is promised to the emperor.

Sting wrote "One Day She'll Love Me" that was to appear midway through the movie where Pacha and Nina are at a party at the palace and the two teens fight their growing attraction to one another.

Yzma had once been an incredible beauty in the Incan royal court. However, time and the sun have cruelly robbed her of her good looks. Yzma begins dabbling in the dark arts in an attempt to revive her beauty although she firmly believes it is the sun that has robbed her of her beauty.

She wants to snuff out all light on earth by unleashing the demon, Supai who is a force of darkness, to block out the sun. In a world locked in perpetual darkness, Yzma feels that her great beauty will finally be restored."

Like the sound of that? There's more. Go over to MousePlanet and give it a look. Also for your perusal is an older article about "The Sweatbox" over in the Fox News archives.
Posted by Honor Hunter at 3:26 PM

Well I prefer much more the TENG story. TKOTS is too conventional!!!Instead TENG is a masterpiece of fun, but also one of the most experimental of the Disney classics... And I love it!!!

TENG is definitely an acquired taste and is very un-Disney for a Disney film (in the words of Leonard Maltin).

I see no reason, however, why The Kingdom of the Sun could not still work. Things would ahve to be changed, such as the characters and the setting, but the story is different enough to be not compared to TENG. The real emperor can't turn into a llama of course, but the root of the story (Prince and the Pauper anyone?) is still manageable with some changes.

Snuff Out the Light is one of my favorite Disney songs not appearing in a film. Eartha Kitt sings it very well.

TENG is certainly an acquired taste. I think it's a very clever movie, and everytime I watch it I discover new subtle gags and winks to the adult audience. I'm glad they decided to discard the plot of TKOTS.
I'm sorry but I honestly disagree with you and I couldn't just let it go, I've become such an avid reader of your blog, and I usually agree with most of what you say!
All the way from Argentina, thanks for all your posts!!

With its box office results, the public is with Honor. This film is one of the many nails that were put into the coffin of hand drawn animation.

May they never make such crap again.

Some of these commenters have not tast. Sure TENG was an hilarious movie. It's missing lots of magic that makes a Disney movie a Classic. They definitley would've made alot more money if they made TKOTS instead. Plus lots of peoples hard work wouldn't have gone to waste. Pitifull really, that we may never get to see this movie in action. Disapointing...

For a long time when 'The Emperor's New Groove' came out my best friend and I wondered about that track 'One Day She'll Love Me'. We even attempted to write to an email address provided at the Disney official website but only received some crappy auto-response that did not answer the inquiry.

While this version of the Pacha character is intriguing I very much enjoyed 'The Emperor's New Groove' and the idea of a selfish emperor who received a very much needed attitude adjustment. And honestly I actually would have preferred to see Kuzco with a love interest if either. One thing I will say is that I think I prefer the 'Kingdom of the Sun' version of Yzma. Such intense darkness her storyline appears to have had. The reduction from that to a simple grudge over being banished is pretty lame.

Personally though I don't see why they couldn't have made both films as they are both significantly different from each other.