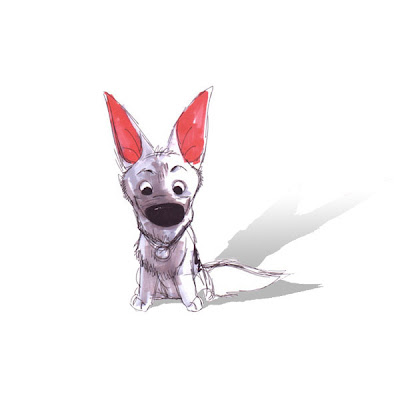 It's taken longer to get there than expected, but Walt Disney Pictures "Bolt" passed the hundred million dollar mark as of yesterday...

The film has already made more than "Meet the Robinsons," so that's an improvement. While Twilight took the wind out of it's sails during the opening days it's recovered to do decent business. Not what the Mouse would have liked, but it's gotten more respectable legs as time has passed. Hopefully It'll do good when the DVD/Blu-Ray is released early next year...

Yeah, some people who are dumping on Bolt's box office are way off IMO. Considering its difficult opening weekend, a lame marketing campaign, and the competition, Bolt is indeed a good boy. And I think it'll rake in big buckaroos in DVD sales - I myself can't wait to get my copy. Bolt is just plain wonderful. Kudos to Disney Animation for finally hitting its stride.

I think Disney could have done a way better job in marketing this film. I am in marketing myself and it seems they have become so gun shy on promoting films. Disney is definitely to blame for the underperformance of this one. The film itself was incredible.

What is not newsy about Bolt's box-office performance? It's a Disney film, this is a Disney site. Got it now?

Has the film opened in all the international markets yet? I thought it still had a few to go...

Here are the places it hasn't opened yet:

bolt is mediocre, i'm not surprised by its modest BO numbers

What surprised me was where are the Bolt toys? I visited Disneyland about 10 times throughout December and I do not recall ever seeing a single thing of Bolt Merchandise anywhere.

Where's the remote control Rhino in a ball? Heck, even I might buy one of those...

Honor, any word on why I can't buy Bolt merchandise at the Disneyland resort?

^^^ You can buy Wall-E/Cars/Incredibles/plushes/toys of most of the Disney films at Disneyland.

I'm thinking for his 7.5 billion dollar investment, Bob Iger may be looking at more than numbers much lower than Chicken Little,(which gets ripped to shreds on this site/comments). I'm not buying the "marketing/timing excuses...people did not spark to this film...period. Sorry.

Bolt was a nice film, although not of the Beauty and the Beast and Lion King quality. I thought that it would do better. What's bothering me is that the subdued marketing campaign and release date against "Twilight" seem to be calculated. Have you noticed that the next few WDAS films will open on Christmas. How much do they actually expect to make with this move. "The Princess and the Frog" will open the same day as Alvin and the Chipmonks 2. Who do you think will rake in the most money? It's a disturbing trend that seems to suggest that there is a plot by upper management to do away with WDAS altogether and allow Pixar to make all of their films. Sound like a ridiculous idea, consider that there have been others who have suggested this plan. Some of these work within animation.