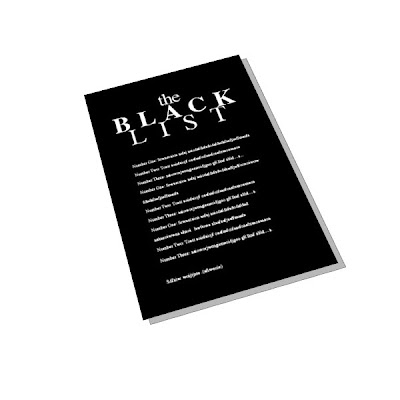 This is not the list of people in Hollywood that were banned from working in the industry during the 50's because of the Red Scare.

This is the list of suggestions from over 250 film executives(read: Suits), who each gave the names of their ten favorite scripts that had been read, bought or not, but hadn't been made/shown in 2008.

For those of you that found BSD's "The 5 Best Scripts Hollywood Never Made" post appealing, this is for you:

Number One: The Beaver by Kyle Killen

Walter Black, a depressed toy manufacturer, loses his family and his business. But then Walter tries on a hand puppet—a chatty British rodent called "The Beaver"—and his personality is transformed. It’s all good at first, but things turn ugly when the puppet won’t let go. It’s Like: Liar Liar fused with the horror movie Magic. Status: Steve Carell is attached to play Walter.

Number Two: The Oranges by Jay Reiss and Ian Helfer

Two New Jersey families are thrown into comic turmoil when the prodigal daughter returns for Christmas and falls in love with her parents’ best friend. It’s Like: The Graduate engaged to Meet the Parents. Status: Anthony Bregman (Thumbsucker) and MRC will produce. Julian Farino (Entourage) is negotiating to direct.

Destiny, a black foster child, faces off against Iowa’s reigning dairy diva, the beautiful but venal Laura Pickler, in an epic butter-carving competition for the ages. It’s Like: Election swirled with Best in Show. Status: Jennifer Garner is in talks to play Laura, while DreamWorks is in early negotiations for the project.

Lee, an old, grumpy ex-cowboy, loses $30,000 to a fraudulent sweepstakes company and sets out to punish those responsible. Lee’s son, the local sheriff, is charged with stopping him. It’s Like: Falling Down splattered with No Country for Old Men. Status: Project is set up with Aversano Films (Failure to Launch).

Charlie "Slim" Hendrick, a don’t-eff-with-me ex-con, returns home to find that his sweetie has moved on and his bitter brother has gambling debts. When a disfigured, dog-loving thug beats his sibling to death, Slim seeks vengeance. It’s Like: Unforgiven, only less geriatric. And much less forgiving. Status: Leonardo DiCaprio’s Appian Way and Tony and Ridley Scott will co-produce.

Emma and Adam have the best relationship ever! They’re twentysomething pals who, you know, do it. A lot. But then Adam goes and falls in love with Emma and ruins everything. Can their perfect non-union survive? It’s Like: When Harry Met Sally… for the Juno generation. Status: Ivan Reitman’s company is developing it.

After the death of his wife of more than 50 years, irrepressible horndog Herb Winter sets out, at age 75, to find sexual fulfillment with another woman. Or, if possible, several. It’s Like: Superbad set in a retirement community. Status: The film is set up at Sony. No director or star is attached.

The New York mayor asks private eye Billy Taggart to find out if the mayor’s wife is cheating on him. She is, with the campaign director of the mayor’s political rival, no less, who soon turns up dead. Did Billy’s investigation lead to murder? It’s Like: A modern L.A. Confidential peppered with Glengarry Glen Ross patois. Status: Being developed by the producing team behind Juno.


Number Nine: I’m With Cancer by Will Reiser

Adam, a 25-year-old single Jewish dude, is diagnosed with spinal cancer. Hilarity ensues. Seriously. It’s Like: The 40 Year-Old Virgin with chemo. Status: Seth Rogen will produce and has signed on to play Adam’s best bud.

Number Ten: Our Brand Is Crisis by Peter Straughan

A team of American political operatives moves to Bolivia to take on a flailing presidential campaign. Loosely based on the 2006 documentary of the same name. It’s Like: Primary Colors picked The Motorcycle Diaries as a running mate. Status: George Clooney’s company will produce it.


And one that was on the list(there were many more than ten, just so you know) Iron Jack happened to be an interesting read and could go on my own personal Black List were I to have one this year...