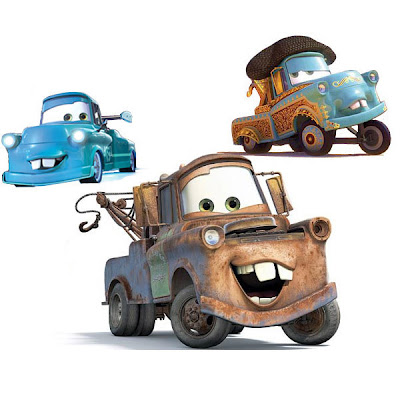 If you've seen "Bolt" in 3D this weekend, then you've probably seen "Tokyo Mater" in front of it. It's a fun, clever short that utilizes two things the Mouse really values.

The company along with many of its competitors are banking on Three-Dee being the thing that will preserve and shield theatrical releases from the onslaught of HDTV and Blu-Ray. I'm still skeptical as to it being the hero here. I tend to think the best defense is a good offense, which in this medium means story. Story, story, story. Having said that, I have to remind myself that the Super Dog got his butt handed to him a few weeks ago by some rather wimpy, romantic vampires. Oh well... the only thing constant is change.

Anyways, the other thing is Mater. He's the most popular of the cast of "Cars," stealing the scenes he was in(Just like Rhino, I might add). He sells a ton of merchandise and there's a reason he's the one they've made these new "Cars Toons" shorts with. He's funny and endearing and he puts people in the seats.

When the film was well in production Lasseter was heard having remarked that they've now created Pixar's Goofy. And he was right. Spot on if you ask me...

The shorts that premiered on the Disney Channel along with the latest one that was released theatrically are the modern equivalent of the old Goofy "How To" shorts, with Mater offering a sort of "How I wished it would have happened" kind of story. We can expect to see more of these and others in the future and you can probably expect him to play a more focal part of "Cars 2" than he did in the original. And if you love him, you're gonna loooooove going to DCA in about three and a half years, but that's a story for a later date.

You'd think for someone working so much, Mater would be able to afford a new paint job, wouldn't you?
Posted by Honor Hunter at 12:05 AM