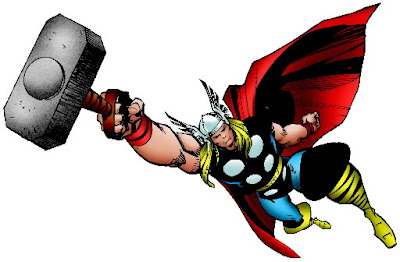 Those of you that remember my post a while back about the "The 5 Best Scripts Hollywood Never Made" will be glad to know that one of those projects is moving forward...

The Mighty Thor, or just Thor is progressing further in pre-production and has gotten a fantastically perfect person to direct it. Kenneth Branagh, who I think is near perfect to adapt this material, but the only downside is...

It won't be the script I was talking about. As good as it was, it apparently wasn't good enough for Marvel and they, along with Branagh are moving forward with another script. Hopefully it'll be as good as the Mark Protosevich draft, but I doubt it. Although they do have a great screenwriter working on it, I'm biased.

Brannaugh? He needs to stick to Shakespear. Remember when he did Mary Shelly's Frankenstein? Yeah, I can't see him doing much for the Mighty Thor. Kevin McKidd may be good casting but I always wanted to see Vladimir Kulich from 13th Warrior but he may be a little too old now.

I read Thor as well. It's an amazing script and a shame that they won't be making it. It shows you that sometimes the best doesn't always make it, sadly. Great taste in scripts, Mr. Hunter.