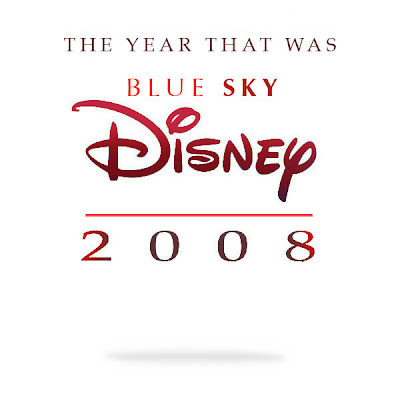 Ok, just when you thought it was safe...

Back with a sequel to yesterdays post. As happens a lot, I wanted to make this all one article, but I tend to talk too much. Yes, I know many of you will agree with that. So what I did was divide it into two parts. Yesterday's covered some of the more interesting post from January to June and today's post covers from July to December. Revolutionary idea, don't you think?

Here's a post where I showed all of Pixar's most lovable characters... that weren't the leads in the films that we called "Pixar's Side Show" just because it sounded cute. Not that it fit the post, that was just a coincidence.

Another example of me fawning over John Lasseter in the post "The Midas Touch" was the reason for this one...

And then my discussion of the difference between "Disney Villains/Pixar Bad Guys" generated a fair amount of debate.

Then there was that little pictorial of the Emeryville Dream Factory known as "The Sactuary."

Not to mention another Blue Sky Buzz post titled "It's just a Fantasy" that focused on many of the proposals for Fantasyland in WDW's Magic Kingdom... sadly on hold.

Superhero Geeks/Fans would be interested in Blue Sky's review of the Green Arrow prison break script known as "Supermax."

And for fans of disney shorts, animated shorts or just shorts in general there was "The Long List of Shorts" if wanted to see how prodigious the Mouse was/is.

How about Decadent Dave's nostalgic article about Tron and his hopes for Tr2n entitled "Tron. Two. Point. Oh?"

Some really cool posters from the original Tron are here in the article "Selling the Future's Past."

Here's a post about the many names that Indy 5 could have been called that I labeled as "If Adventure had a Different Name."

More man-love for Lasseter here in "A Future so Bright." Yeah, I know... I got it bad for big guys in Hawaiian shirts.

If you ever wanted to know what could have come of Indiana Jones then read "Indiana Jones and What Came Before, Part 1" here. I know, you're asking where's part two? It's coming, it's coming... SOON.

For a look into what could be the future of Disney theme parks we have "Happenstance Part 1 and Part 2."

Then there's one of my posts about what makes Tokyo DisneySEA so awesome entitled "Building Better, By Example."

A post about Disney and the pressure will get from Universal when Harry Potter opens up in Florida I called "A Battle between a Wizard, a Mouse and the World Part 1" is here. And yes, I will have a Part 2, but it won't be till later in 2009. Or the broader post that was a pictorial of the competition that Disney faces called "The Competitors."

Or there was the Dark Period in Mouse films known as "Beloved, not Loved" where I talked a bit and posted a whole lot of pics of films during the time when the Disney company was directionless, without a true successor to the Maestro...

For what it's worth, we covered that big event Disney had in September where Dick Cook wowed all the press in this post called "Disney Open House."

Then when it seemed the bottom fell out of the economy we posted the Blue Sky Buzz post called "World Gone Wild" to the sadness of many a Disney Geek/Fan.

And Apple received some TLC in "The Metamorpheus" as if they really needed it.

Through the magic of YouTube I was able to show you the making of Tokyo DisneySEA in "SEAing is Believing."

Or Steve Jobs and his amazing turnaround of Apple in the past decade in Blue Sky's "Jobs Opening" post...

The logo/pictorial post that was "One House, Many Rooms" shows how far reaching and graphically pleasing the Mouse can be.

Yet another post about John Lasseter entitled "The Power and Influence of Success" that I really enjoyed writing.

Perhaps you missed Blue Sky's opinion put into list of the top 10 Disney villains called "The Best of the Worst you love to Hate."

Then there was the post I made that was really a link to a fascinating perspective by Jerry Beck called "Theory in Flux."

Or my discussion of how things have changed at Walt Disney Animation since the arrival of Uncle John/Moustro that I called "The Lasseter Era Begins."

How about Decadent Dave's post "Beyond the Black Hole" that was actually better than his Tron/Tr2n post IMO...

For the Film Geeks/Fans there was "The Black List" which talked about the 10 hottest scripts in Hollywood right now. Of course, it could change in ten minutes.

What I considered a very sad commentary on the end of Stevenotes entitled "The End of the World as we know it."

Then we have THX's "When George Lucas could do no wrong" pictorial post or my very own "What If" post about the possibility of an Indiana Jones cartoon called "Animated Jones and the Quest for Dini."

And lastly we have "Rhapsody in Blue Sky Part 1" which I...

Oh well, that was so, uhm. Yesterday. Nevermind.

hehe, John Lasseter doesn't just have Hawaiian shirts, it seems that he has one for every occasion (or interview)
A Cars shirt, a Bolt shirt, a Tinker Bell shirt...
Its amazing!

Honor, thanks for a great year...you are the Blog Masta! Happy New Year, Bob & Rob