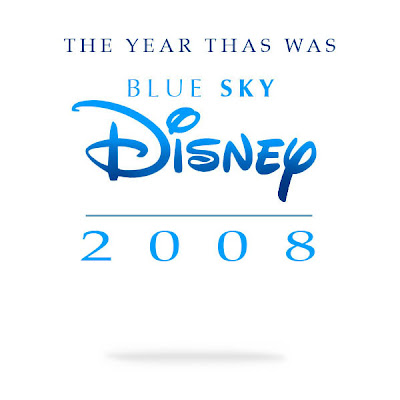 With the year coming to a close I figured we would take this time to look back on some of the 600-plus posts that have been made in 2008...

I can't believe I logged that many but apparently I did with a little help from my friends. So let me take a moment to put the spotlight on several post that got a lot of comments/e-mail, you might have missed or that I simply think might be worthy of another look.

For those that would like to refresh themselves with how Tokyo Disneyland came to be we had the "Tales of the Orient Part 1 and Part 2."

Then there was an article that focused on all the complaints about the "cartooning" of the parks called "Too Much, Too Many, Too Little, Too Late."

Or the one post we did on the history of the Disneyland Hotel and how the Mouse got it called "How Much For A Room?"

Or the ones we did about the Disney Shorts' Title Cards that were labeled "Above the Title Part 1, Part 2 and Part 3"

Perhaps if you're a big fan of Tokyo DisneySEA like myself, then you'll remember the "Born Full Grown" article we posted earlier in the year...

How about the post discussing the influence of Steampunk, Burroughs, Wells and Verne on Disney in film and parks entitled "20,000 Leagues under the Influence."

For the movie-buffs we had "The 5 Best Scripts Hollywood Never Made" which generated quite a few e-mails.

Then there was the discussion of the importance of detail in a theme park entitled "Layering on the Narrative."

Or the post about how Lasseter was choosing directors for Disney animation versus Pixar animation known as "Two Versus One."

Perhaps a little bittersweet post about Pixar and life called "To Everything a Season" that was quite me being reflective and using Pixar as my inspiration. Or the "Finding Perfection" post which I enjoyed writing more...

Then there was the article about my perspective on the parks entitled "Work in Progress" which even got Corruption to give me a compliment. Thanks again, Corruption...

Or the Blue Sky Buzz post called "A Part of your World" about Walt Disney World getting a clone of "The Little Mermaid" attraction as well as several other interesting items that are unfortunately on the back burner till after the economy picks up.

And I can't forget to include the post I call my Mission Statement known as "Losing Focus."

Then there was THX's post "Star Wars Must Die" that got quite a few people upset.

As well as my own posts about George Lucas' empire and its future called "A long time ago, in a Galaxy far, far in the Future."

Maybe you'd be interested in my perspective on how the Net has affected the Mouse for the better over the last decade or so with this post called "There are Know Secrets, anymore."

Several post have been about what Disney could do, but this one labeled "The Disney Lands that Time forgot" was about what it didn't do...

Thoughts on Mickey here in "Redefining Mickey." Or getting an idea of what we have with DCA versus what we could have had in "Going through a Phase(s)."

Even my take on what will become of Indiana Jones in the aptly titled "What becomes of Junior."

Yes, it's been a busy year. I want to thank each of you for being interested in what we say here...

Part Two will post tomorrow, btw.
Posted by Honor Hunter at 12:21 AM

You do a marvelous job of posting! Thank you for your time and effort! I visit your site at least every other day because its that good.

Good work this year.
Thank you very much.

I hope in 2009 Bluesky posts more Disney and less about George Lucas.

I hope is 2009 George Lucas gives Blue Sky nothing to post about!

Good work. And I must say, part of what makes you're site awesome are the titles you give your posts.

Congrats on a rather prolific year. Sorry about my lack of visibility lately (if "sorry" is actually the right word for you).

I hope that you continue to grow and prosper as a Disney blogger :)

You'll definitely be hearing from me after the new year, as always ;)